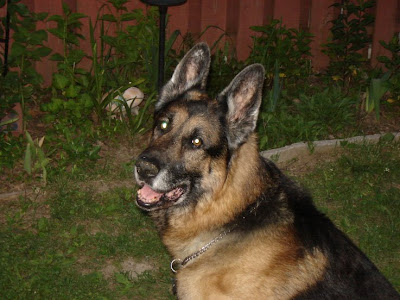 It has been a hard week for our Bear of the Week, oops, our Pup of the Week, the great, strong, indomitable Baron (aka) Bear. He has something called arthritis. I don't know much about this but I know it hurts Mommy a lot. Somedays, when she is in terrible pain, I just sit in her lap and lick and that makes her feel better. (I wish I could sit with Baron all day and lick. I hope it helps him as much as Mom.)

But get this: From his pain and suffering Bear has brought us a new means of transportation. He has grown wheels! I am nine years old now, and while I love to romp around the house with Pocket, there are times I'm in too much darn pain to keep up with her. Growing wheels like Baron would certainly do the trick, and I can't wait to hook up with him to see how he does it.

Now for me, becoming the Tanner Brigade version of Optimus Prime is reason enough to be pup of the week. But Bear showed his mettle by fighting through some tough medical issues too. On Monday morning he had the rumbly tummblys and was forced to eat hamburger (OK but better on a pizza) and rice (BLAH).

When his Mommy came home Baron was not feeling very good at all and it was time to go to the Dogtor. The Dogtor did all those terrible tests, rolling you into this position and that, drawing blood and looking at it, making her mother and poor Bear wait. Most everything was normal but he had too much white stuff in his blood which means the poor boy had a fever.

By the next day Bear was back to his old self. And get this, I did not know this, but that handsome dog is 12 and a half years old. Can you imagine being that good looking at that age? I'm only hoping I'll be as cute as I am today when I am 12 and a half.

So, because of his fighting off the illness, and because his Mom, with her unbelievable love and generosity helped him become Speed Racer GSD, Baron AKA Bear is our pup of the week
Posted by Foley Monster, Pocket and River Song at 4:40 PM