Dexter the Dog Who Walks on Two Legs 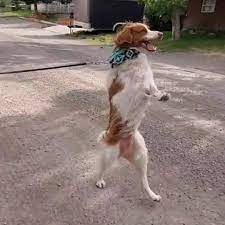 I was worried when I got a request from Enzo on the Mountain for a meeting.  He is beloved by so many, and when the day comes that he passes over, there will be grief that can't be spoken.  I was grateful when I discovered, typical of Enzo that he wanted to see me about someone else, namely Dexter, the dog who walks on two legs.

He had read about Dexter and thought more people should learn his story.  I told him I would be honored to spread the word.

Dexter is a six-year-old Brittany Spaniel who walks Ouray in the shadow of the San Juan mountains on his hind legs like a human.  This unique talent has made him a cause celebre in his little western town.

Dexter was not always a biped walker.  Five years ago, shortly after joining his forever family, rambunctious Dexter followed the pee-mail left by a deer when he wandered onto the street where a tractor-trailer crashed his front legs.

His parents feared that they would have to send Dexter to the Bridge.  He was the dog selected by his two predecessors, who had transitioned to the Bridge the previous year.  Losing another dog in 24 months was more than his family could bear.  Dexter's mom had dad vowed to spare no expense in avoiding Dexter becoming their third angel.

The vet thought he could save one of the legs.  He inserted pins in it.  The other limb went to the Bridge to wait for the rest of its body to arrive.

Dexter went through multiple surgeries and rehabilitation.  Dexter did not trust his remaining leg to support him, so he chose to learn how to walk on his hind legs like he had seen his beloved humans do.  He has never stopped.

One day, while walking with his mom, upright and proud, a Tik Tok celebrity filmed him, and soon the video went viral, gathering five million likes, which is how we measure fame in the Internet age.

Dexter wanted to control his brand, so he convinced his mom to set up an Instagram and Tik Tok account for him through eye-to-eye communication.  It has become so popular managing it is now his mom's full-time job.

One demand Dexter made was that his parents would not monetize his status. He wanted to be a pure inspiration to dogs who lost limbs and not have it sullied by the greed spurned when something produces a single dollar.  Dexter is wise beyond his years.

I went back to the Mountain to thank Enzo for introducing me to his extraordinary pup.  I should have known he would know the best dogs because he is undoubtedly one himself.