Foley Intervenes to Stop River From Attacking Pocket in Bed 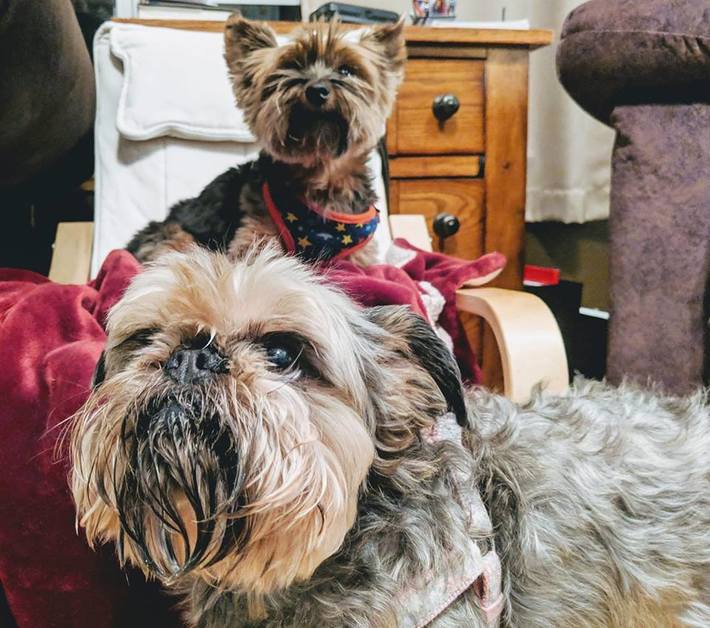 After the last fighting-in-bed incident between my sisters, I had seen enough.  I don’t care if they attack one another. I do worry about River’s size advantage. I have worked hard to keep Pocket from coming to the Bridge and taking her into my home. I don’t need River sending her to me in a fit of pique.

I summoned my sisters for a dream meeting. The topic was not about fighting but one close to my heart. When River bit Pocket on the back of the neck while sleeping, causing her to bleed on the sheets, she disrespected the bed.

My sisters got to sleep on the big mattress too easily. I spent my first few nights in a crate next to it.   While suffering through that lonely cold night,  I promised if I ever got the chance to sleep in the bed, I would respect it wholeheartedly.  When my opportunity came, I kept my word and treated the bed like a heavenly sanctuary.

Pocket got the bed her first night by whining incessantly until she broke you and was allowed into the bed so you could get a night’s sleep. River did not have to work for the bed either. You were still grieving my loss and needed a dog who wasn’t like Pocket, all skin, and bones to sleep next to you at night.

Because they never spent a night out of bed, they didn’t appreciate it and disrespected it.  It was time for me to straighten them out.

Immediately River placed blame for their tussles on Pocket correctly, pointing out that I lived with four other dogs spread out over my lifetime, and the only fights I had were with Pocket. “She’s an instigator, I tell you, an instigator,” River barked.

“How can I be an instigator if I’m curled up at the end of the bed sleeping?” Pocket inquired

“You twitch in your sleep, and that wakes me up. Regaining consciousness makes me cranky, and I lash out at the first thing I see the smaller than me, which is you. Also, I don’t trust you. I even wrote a poem about it.

“Wake up with a start at night  filled with fright

The little dog curled up at the end of the bed does she bite?

“What a stupid poem,” Pocket observed. River said it wasn’t; they snarled at one another and began to tussle. Pocket of the very few teeth and River of the smushed in face barely laid a bicuspid on one another, but they still had a chewer’s chance at a knockout bite, so I shrilly whistled until they stopped.

I told them if they fought in the bed again, I would give them nightmares about being abandoned in a big field in the snow with coyotes on their tail.

“Mommy doesn’t like us fighting on her lap either,” Pocket informed me.

“Then you must respect her lap and the bed.”

“How about Daddy?” River asked

“Let’s not get carried away,” I told them. “You are little dogs, and there is only so much respecting you can do. Anyway, we are doing him a big favor.  Once River stops attacking Pocket, he won’t have to go to bed holding the leash clipped on River to stop her from charging Pocket.  He will be relieved he no longer will be strangling himself three times a week.  Although River does like her bed bondage, he still might have to keep her bound just for fun.

But I don’t see it coming to that because River will never stop, which I understand because no one is more annoying in their sleep than Pocket.