The Titanic Dogs: The True Story 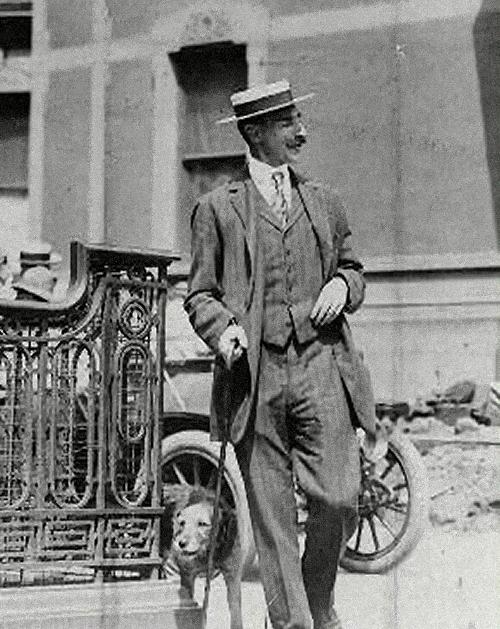 John Jacob Astor IV was not a man who learned to accept no for an answer.  When he booked his voyage on the Titanic, he planned to take his Airedale, Dividend, with him.  When he was told the ship had reached its quota of dogs, Astor changed the dog’s name to Kitty, reported to the liner it was a cat, and figured, upon boarding, he would pay off whoever was counting dogs and cats.

A couple of hundred dollars got the crewmen to say that Kitty was a cat.  Of course, being a gentleman of extreme wealth, Astor did not take his dog to the poop deck.  He had a servant do that.  One cold evening, Kitty took his last walk above deck when he stopped, smelled the air, and noticed the unmistakable scent of ice.

He began to bark at his handler, but Astor told him not to pay Kitty any attention.  Knowing that doom was imminent, Kitty pulled on his leash until his collar snapped.  He ran to the Bridge barking that they were headed for ice, but he could not convey his meaning in time.

Every dog on board knew from the sound, and the change in air temperature, that the ship and been ripped open.  Kitty ran to his dad, who was smoking a cigar, and brandy drinking, to tell him they had to flee the sinking ship.  Astor would not listen, and when Kitty persisted, kicked him in the ribs to shoo him.  Kitty was always trained to do things for his parent, but dogs help those who would help themselves, and if Astor refused to do anything, then there was nothing Kitty could do for him.

Kitty left her dad and began to run through the ship’s corridors barking that the vessel was sinking.  To the passengers, it meant nothing, but to the 13 other dogs on board, they understood fully and began to try to get their families to the lifeboats, with mixed results.

Two Pomeranians, one named Lady, and a Pekinese named Sun Yat-Sen, who belonged to the Harpers of publishing firm Harper & Row, was smuggled on the boats. At the same time, other dogs were either denied entry to the life rafts or left behind by their panicked owners.  They were determined to have perished during the sinking.  But now, thanks to the tale said to me by Kitty, I know the truth.

While everyone was climbing the stern to get to higher ground, Kitty led the abandoned dogs towards the water.  They found a floating door, and, even though a Setter named Rose insisted there was only room for her, they all fit on it;  Rose was shoved to the back so that everyone could get on board.

They floated to an island just off Newfoundland’s coast, where they founded their dog nation.  They lived there for generations, with Kitty as king and a much less selfish Rose as queen.   Three of Kitty’s ancestors became king until one day they decided they wanted to live with humans again, barked at a passing ship, and were brought on board.  No one knew how they got there, and they would be shocked to learn they were the offspring of the Titanic Dogs.

When Kitty went to the Bridge, he found that all of his father’s ill-doings caused him to become a minion, and now he is sentence to pick up Kitty’s poop for 200 years.

Next time a dog barks ice, you better listen.