The Gravestone Buried in the Woods 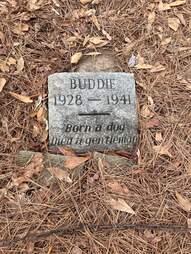 Serena, a one-eyed Terrier, loves to walk with her dad in Kiroli State Park in West Monroe, Louisiana.  Because of her lack of peripheral vision, Serena developed a keen sense of smell.  This leads her to a startling find, which spurred me to find a pup who passed 80-years-ago.

Serena took a break from chasing ducks to sniff the ground.  She smelled something that should not have been there and began to push aside the dirt and leaves.  Serena found a strange stone with letters on it.  She got her dad’s attention.  He bent down and read aloud: “Buddie 1928-1941:  Born a Dog, Died a Gentleman.”

Serena’s dad is naturally curious and wondered who would bury a dog alone in a park.  He began researching the town history and came across an article detailing how the park was once a Boy’s Club camp, and the mascot was a pup named Buddie.  One day one of the boys strayed too far from shore.  Buddie saw him, barked shrilly, alerted the counselors, who saved the boy.

That night Serena prayed that she wanted to meet Buddie in her dreams.  The Big Guy assigned it to me.   This would be a challenge.  I didn’t know where Buddie was or how to find him.  But I am known for rising to a challenge, and I set out to find the little gentleman.

There is a special place at the Bridge where the children play.  Puppies like Skye will always be youths in the immortal world, and so are children.  It is terrible to think that their lives were cut short, but they bring positive energy to the Bridge.  It would not be a proper afterlife without the sound of happy children.  Most angels want to rest, but kids love to play, so they are sent to day camps.  I checked a hundred of them until I found one with a mascot named Buddie.

I found the camp by following the sounds of happy children splashing in a lake.  I looked for Buddie but could not find him. Then I heard a dog ask if he could help me.  I glanced up and saw Buddie sitting in the Lifeguard’s chair.

I then recounted how Serena and her dad had come upon the little dog’s modest headstone.  “Isn’t that humorous,” Buddie said.  “I thought the marker must have been bulldozed by now.  It was lovely of the camp to honor me in that manner.”

I inquired of his life, and Buddie said that he was a stray, not uncommon in those days, who began to stay at the camp because children are careless with their food.  The kids took to him right off, and he did to them.  In a manner, Buddie was the first therapy dog.  Scared, angry, and sad children were put in a room with Buddie, and he calmed them.  Then there was the day that he barked to save the boy from drowning, and he was made a permanent member of the camp.  He had come to them a gruff feral, and when he passed, he was a charming, happy pup, which was why his survivors created the headstone.

I told him about Serena, and he said he was anxious to meet her.  He had not gone back to the camp since he went to the Bridge.  That night I accompanied Serena and Buddie on their dream date.  I watched with joy as Buddie ran around the old campground, magically showing us how it looked in the ’30s and then back to the way it is now.  By the end of the night, Buddie was exhausted but thrilled that he had returned to the camp, and Serena was satisfied with all that she had learned.

I know many hero dogs whose stories are just below the surface, which is why dogs scratch the ground before they go to sleep.  They are looking for something good to read.

Posted by Foley Monster, Pocket and River Song at 5:05 PM