After a Tragic Loss Pokey, Maggie and Toby Travel Across Country to Their New Forever Home 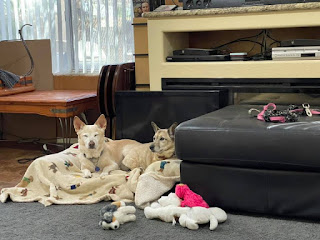 Pokey, Toby, and Maggie didn’t know if they would ever lay their heads at a place they could call home again.

When their mama Laura took sick last year, her family cared for the beloved pups.  When her condition worsened, plans were made to send the dogs to a good friend of their mom’s in Illinois, who generously agreed to take them. Against all odds, Mama Laura rallied and returned home, albeit too briefly.

Mama Laura was caught in a perfect storm of illnesses that would not let her escape. After a brief few days at home, she returned to the hospital and then to rehab. Toby, Maggie. and Pokey went back to a family member’s house. Because of their unique connection with their mom, they knew they wouldn’t be returning home. For the time being, their future did not concern them because they were worried about their mom.

Then came the terrible moment when Mama Laura saw them in their dreams and told them that she had been called to the Bridge. She promised always to be a presence in their lives, but soon they would get a new mom who they should love and respect as they did her.

Mama Laura’s family knew of her agreement with a friend to take the dogs, but the woman had a large pack, and the family became concerned that Laura’s dogs needed individual attention. For the family, trying to find a home for three adult dogs, one 16-years-old seemed impossible.

On the other side of the country, while mama Laura was fighting her health issues, Shiloh the Pitty, after a long battle with cancer, departed for the Bridge.  No one realized why, and the sacrifices he made, he left his momma Kate without a dog.

But Shiloh knew what was happening, that Laura wouldn’t be coming home and the three dogs would need a place of their own. He made the ultimate sacrifice and went to the Bridge to give his friends a chance at the perfect home.

Mama Laura and Mama Kate became friends on the DoggySpace site. When Mama Kate came to Boston for a conference, she visited Miss Laura and met Pokey. The two dog moms started a beautiful friendship.

Kate knew that Mama Laura would love for her to care for the dogs she considered her children.   When Kate found out that the Lunn Trio needed a home with no other dogs, she immediately stepped up. She survived the family screening process and was told she’d be the trios’ new mom.

There was only one slight problem Kate lived, 2,600 miles away in Arizona. But thanks to Denise Carrothers, who set up the transport and the volunteers at BarkinQ Rescue Across The Globe, the trio left Massachusetts for the first time and headed west to seek their fortune.

The transfer officially happened in Missouri. Goodbyes and hellos were exchanged, and loaded the dogs into Kate’s vehicle. In less than 24 hours, they were at their new home.

Pokey, the pack leader, had taken all the pack’s anxiety on himself, assuring his siblings there was no reason to worry.   Once settled, he let loose his nerves and was so overcome he had trouble walking. Mama Kate took him to the vet, and they found nothing wrong. He was in perfect health for a 16-year-old. Traveling more than 2,000 miles takes its toll on all of us.

Mama Laura was with her dogs, in spirit form, all the way from Massachusetts to Arizona, but now that her pups had a new mom, she had to leave them so she didn’t take any love away from their Mama Kate.  She told them if they needed her, just take a nap and she would be there.

She knows she no longer has to worry about her precious babies because they are in the perfect home and the best of hands.