JD Tries to Make Wendy's Arrival at the Bridge Perfect 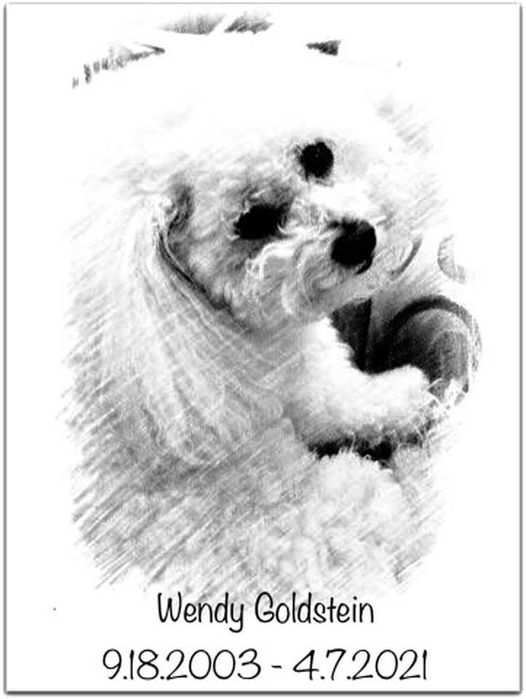 I was awoken this morning to the sound of someone cutting my hedges. I got out of bed and went outside, where I saw the little ball of white fur I am lucky enough to call my friend JD trimming the bushes.

I inquired what motivated his need to landscape. “My sister Wendy is arriving today. She is perfect, so I want everything is spotless for her.

After he ate, he told me he needed to get back to trimming. I said I had seen thousands of dogs reunited at the Bridge, and they didn’t care what the scenery was, just who greeted them.”

“You’re right,” JD exclaimed, standing abruptly and knocking over my broth boat, then he apologized profusely. I told him not to worry because someone would be by to lick it up soon. He stated that he needed to look perfect for his sister. He took me by the paw and dragged me to Tiara’s beauty salon.

Tiara, a beautiful Shih Tzu, opened her shop with her sister Lovey when she arrived at the Bridge. If there was a special occasion, the dogs flocked to her shop to become even more beautiful than they already were. JD is an exceptionally well-groomed dog, and Tiara tried to explain she could not improve on his looks, but he insisted. I suggested a rinse and blowout, and they both agreed.

I must admit JD did look fetching after being blown and fluffed. I looked up and noticed we were late. I yelled to JD that we would have to run to get there on time. We were intensely motivated because JD wanted to be the first to hug his sister, and I had never missed a swearing-in ceremony.

We got to Hobo’s Landing, and I was fortunate that my sister Blake had brought my robe and gavel. Wendy had just begun her journey across the Bridge, where all the pain and misery she had accrued while living was washed away. Overcome, JD ran down the steps and tried to jump on his beloved sister, but he mistimed his leap, sailed past Wendy, hit the ground, and rolled into the River.

Poor JD crawled out of the water, soaked and smelly with his fluffy white fur matted to his skin. “Oh, Wendy,” he said. “I so wanted to be perfect for you.”  Wendy hugged him, placed a kiss on his cheek, and told him the moment could not have been better. She then led him up the stairs and was sworn in as her mom’s newest angel.

Wendy had been Mama Silvie’s constant for 17 years. Some dogs became part of the pack, and others went to the Bridge during her lifetime, but Wendy persisted. Having a long life does not make passing over easier, especially for a devoted mom. In the end, those 18 years went by in a flash of light.

Wendy still has three dogs, lead by Ari, working with the angels to keep their mom happy.  It will not be easy as this punch was one of the strongest she has taken.  But, no one can stay sad all the time when there are cute, barking, little white dogs running around.  And if she squints out of the corner of her eye, she will see JD, Wendy, playing with them in shadow form.

It is going to take more than just going to the Bridge to keep Wendy away from her.

Posted by Foley Monster, Pocket and River Song at 4:32 PM