Pup of the Week: Wishbone The Survivor 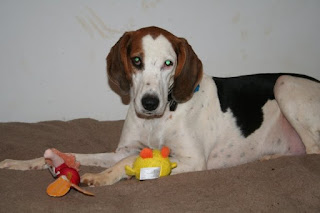 Every television season some island dwelling reality star is deemed “The Survivor.”  Spending 39 days on an island with a medical staff and camera crew may be surviving to some, but we dogs know true survivors, and no one fits that term more than my good friend, the resilient Wishbone.

I first became friends with Wishbone when he was just a pup.  He was a coon hound in the South who wouldn’t hunt.  His original owner deemed him worthless.  Damn fool.  He didn’t know he had the most irrepressible dogs in the world.
Wishbone was saved by Dog Rescue Hall of Fame member Paula Malatesta.  But Wishbone had never learned to trust a human, and was born to run, so the first chance he got, he bolted from the Malatesta’s yard.  Paula looked for him for days but Wishbone had learned how to avoid humans.  On a Sunday, after church, Paula saw Wishbone and gave chase.  She tumbled down a hill.  Wishbone stopped to check on her.  Before Wishbone knew what was happening he was back home.
A few years later Paula took very ill.  Her family knew her devotion to saving dogs was taxing her health.  They decided that, to save Paula, they had to surrender the dogs to a shelter.  As the dogs were being rounded up Wishbone ran out of the yard.  But he didn’t go far.  When Paula was released from the hospital Wishbone returned home to be with his mom.

Paula knew she had to find Wishbone a permanent home.  She reached out to her friend from New Hampshire Tiffany Provost who was very happy to give this wonderful boy a home.  Shortly after my passing, my parents, River and Pocket, got to meet Wishbone and his Mom at Pokeyfest held at Pokey’s home in Woburn MA.  My parents fell in love with Wishbone immediately.

The one thing Wishbone could not outrun was time.  As he aged his spine began to fail him.  Every movement was painful.  His parents knew he was suffering.  Their vet told them that she could operate.  Wishbone’s parents knew he was a survivor and believed he could win his ultimate fight.

His operation was successful, but there was still a risk. If the day after his surgery, Wishbone did not have to feel in his back legs, he would not be able to walk again.  I flew lots of prayers up the mountain to the Big Guy for Wishbone.  His sister Annie flew up twice as much as I did.  Thankfully, our prayers were answered yes, and Wishbone would walk again.

At first, recovery was slow.  Wishbone’s mom had to take him outside with a sling.  Wishbone did not have full control of bladder and dribbled a lot.  Wishbone took up a lot of his parents time, but they were committed to his recovery.

As Wishbone healed he was in no mood to rest.  He was crated for his own good but when it was time for him to go outside he dragged his mom outside.  His mom had to something called “expressing” him, which doesn’t sound nice for either one of them, but they learned how to do it together.  His mom wanted him to go one the deck but Wishbone is a strong dog and he wanted to go in the yard so he often pulled his mom off the deck.  He was supposed to be in his crate, but since he could not move on his own, he was allowed

By the end of November, a couple of weeks past his surgery, he was showing progress.  One back leg was ready to go but the other impeded his walking.   He had left the confines of the bedroom to sit with his mother by the Christmas tree and there was no more dribbling in the house.
By the beginning of December Wishy was going through the night without getting his mother or to poop or pee, or messing his bed.  He got a big hug and kiss from his mom for that achievement.  `
Last Monday Wishbone gone his staples out.  Poor Wishy had to be dragged into the vet’s office.  He is a smart boy and thought he was going to be left there again but this time he got to go home after a short visit.   He also got a good verdict.  The vet was impressed he had come so far in three weeks.  The vet said with PT he should be back to normal when was healed.
That Saturday Wishbone went for his first PT meeting.  He received cold laser treatments and his mom was given some homework to do.  The PT aide also put him on an underwater treadmill which most have been very cool.  He did a great job on the treadmill.  His mom planned for four treadmill sessions a week, and then she learned that it was $200.00 a session.  She was willing to pay it but Wishy knew the family had bills too and convinced her, with his soulful dark eyes, that he could get by with only two visits a week.
By Friday Wishbone had become the master of the treadmill.  Aiding him in is mastery was peanut butter.  At first he did not want to move, but his therapist tempted him with the tasty treat and Wishy began moving.  Many dogs would find the underwater treadmill, with the noise, and the water rushing around him, scary, but Wishbone is a survivor, and he kept walking, in pursuit of that peanut butter.
Wishbone, who was on ordered crate rest, rehabbed with stepping foot in his crate.  He was told to stay in his bed, and his did.   Being born to run his being locked in a cage may have broken his spirit.  His understanding with his mom is so strong that she knew not to crate him, and he knew not to leave the bed.
Each day Wishbone will get better until he is himself again ready to take on every challenge with strong legs and spirit.
It is so nice, the week before Christmas, to not have to write about an arrival, but a survival.
To Wishbone:  Long may you run.