My Dinner With Obama 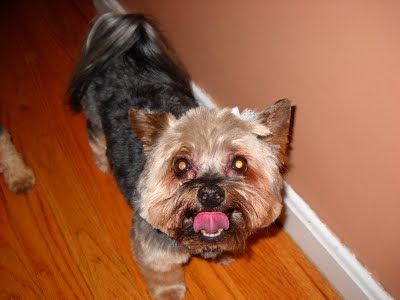 I am a dog of many accomplishments. I defeated the Princess, helped found the Tanner Brigade, have a loyal following, and with these accomplishments has flourished a great amount of confidence. But when I learned I was to have dinner with the President all my well-earned confidence dwindled away.

I made an appointment with my groomer and got a very beautiful puppy cut. I had her put a white ribbon in my hair and had her clean and iron my Tanner Brigade neckerchief. I even had her squirt me with a scent so I would not offend.

They offered to fly Mommy and me down to Washington but neither one of us like that. We had Daddy stay home with Pocket, because, let’s face it, if Pocket went to the White House it wouldn’t be the White House anymore, it would be the yellow or brown house.

We left by car. Mommy did most of the driving. I did a little bit, like when we were on the Jersey Turnpike and I woke up, curled up in the front seat, and saw Mommy sleeping with her head against the driver’s side window, and her foot pressed firmly on the gas, and us headed for a refinery. I let out a yip, jumped on the steering wheel, straightened the car, and either my tail, or the little fear fart that popped out, awoke Mommy, and she slowed down.

We got to the White House and met the Secret Service men who brought us into the building. Mommy went with Mrs. President to see her new garden and play with the children. I was told I needed to meet with the President’s advisors on ribbons.

I was put in a very comfortable chair and a woman came in with a younger man and she looked at my ribbon.

“A white ribbon, I don’t think that is going to work at all,” she said.

“White represents purity, it opens up the whole abstinence vs. education debate,” the younger man said. “We can’t have you sitting with the President making a statement about sex education.”

“Oh no,” the woman said. “Gays in the military, can’t have you protesting that.”

“Socialized medicine,” the younger man said. “Can’t be seen with the President protesting that.”

“Well I need to wear some kind of ribbon!” I said. The aides huddled and they agreed I could wear the white one I would just have to turn when the picture was taken.

I was then led outside to a table on the lawn and hopped up in a chair. A man with white hair and shiny white teeth came out.

“Hello there!” the shiny man said. “I’m Vice President Joe Biden!” He shook my paw. “Isn’t this great, beautiful weather here in DC? I used to ride the train every day from Delaware to the Capitol and look where it got me, Obama’s butt boy greeting a dog on the White House lawn. And it isn’t even my dog, that’s the wild part. I can’t even bring my dog here. But his dog goes on the lawn it’s up to old Joe to go clean it up. Anyway have I said too much? Sometimes I say too much. Lick me.”

I did not like this man at all. I turned and then I felt my stomach drop. It was Casper, with his tail and nose high, and I felt the need to nip him. To fight it off I jumped on Biden’s lap, licked his mouth, and gave him a little tooth. He seemed to like it a little too much.

Casper sat down and Joe Biden gave her the same speech. Then the waiter came out with a beer, a soda, some Nine Lives, and a plate of the wonderful frozen chicken recipe posted on the Tanner Brigade. It smelled so good. But I knew I had to wait for the President.

Then I heard the sound of bird wings gently flapping. I looked up and saw the President, in shirtsleeves, being carried by hundreds of doves, down to our table. He was put on the ground, kissed the head of the flock, whispered in her ear, and watched her lead the flock away.

He then turned to me, reached for my paw, and said he was President Obama. When I put my paw in his hand I felt all my problems melt away. I was floating on a lazy river with Tanner, Sophie and Teddy Bond blowing bubbles and singing a happy tune. I had never felt so happy or content in my life. Then he let go of my hand and I was back sitting on a hard chair with two middle-aged men and a cat.

He said hi to Casper who didn’t seem as impressed and sat down. “You know, when I began my campaign, I never imagined I would be sitting in the back yard of the White House trying to mediate a problem between a cat and dog.”

“Me either,” Vice-President Biden said. “When I began my campaign I figured I’d be holding White House dinners and old Barak over here would be begging for a five minute meeting in the men’s room, and I would say no. To be sitting here with President Obama, I did not see this coming. No way!”

“OK buddy,” the President said, tapping his hand, speaking in a pleasant voice, but giving him a stern look. He turned back to us. “One of my jobs as President is to help find common ground between those involved in disputes to show them that deep down, dog or cat, man or woman, black or white, we all have things we can agree on.”

“Even the Mexicans and Orientals!” the Vice President said.

“Thank you buddy,” the President said but gave him another stern look. “Now, let’s see what we can agree on. How about squirrels, boy I don’t like them.”

“Me either!” I said excited to find common ground. “I chase them whenever I see them.”

“I don’t pay much attention to them,” the cat said picking at her Nine Lives. “They do their thing, I do mine.”

“OK,” the President said. “How about rain? I hate when it rains!”

“I don’t mind,” the cat said licking his paws. “I pee in a box. When it rains I just sit in the window and watch.”

The President took a long drink to hide his annoyance. He put his glass down and pursed his lips. “You’re both from Massachusetts, you must hate those Yankees.”

“They make my Daddy very frustrated so I don’t like them,” I said.

“You have to respect their winning tradition, they are a great team,” Casper said.

“That’s true,” the Vice-President said. “You know who I liked? Joe Pepitone. It was a fun name to say. Pepitone. Say it with me: Pepitone.” He saw the look the President was giving him and stopped.

“How about the vet? That thermometer in the bun hole. Wow. What’s up with that?” the President asked.

“I don’t really feel it,” the kitty said.

“I bet you don’t,” Biden said. “Your backside looks wider than the Lincoln Tunnel.”

Both Casper and Obama gave Biden a withering look. He looked down and drank his soda. The President leaned towards me. “Never mind getting Congress to agree on health care I can’t get a dog and cat from Massachusetts to agree on the Yankees,” he said.

The President took a long pull of his drink. “Hey Joe, I think Bo took a poop on the South Lawn. Why don’t you take the pooper scooper and head on over there.”

The Vice-President scowled and began to rise when an aide came to the President and handed him a piece of paper. He held up a hand to stop him and read the note, folded it, whispered something to the aide and had him walk off. He took a long drink of his beer.
“It would seem, Casper,” he said looking at the cat, “that the people who own the home outside of which Foley stopped you don’t own a cat.”

He took a deep breath. “It seems, that if Foley had not done what she did, that this cat would have robbed them.”

The cat growled. “So you got me Obama. Good for you. But you can forget about holding me. There has never been a cage made that can hold me. I’ll be back on the street by dawn, sneaking in doggy doors, stealing jewelry, fighting for kitty rights, and going to town hall meetings about health care and yelling out untruths to scare the elderly.”

President Obama looked up at Mr. Biden and said “Before you pick up Bo’s poo do you mind throwing the kitty in the pool?” he asked.

“As you wish Mr. President,” he said then picked up Casper and carried him meowing and screaming towards the pool.

The President smiled at me. “I am sorry Foley I never should have doubted you or said you acted stupidly.”

“That’s all right Mr. President, I am just happy that my name will soon be cleared,” I said.

“Yes, about that Foley, there is one important rule in Washington, has been around since the man himself was President, and that is the President is never wrong. So, we’re just going to have to say we had a meeting of the minds and you two agreed to disagree.”

“Agree to disagree what does that mean?”

“It’s just something we say that the media accepts as being an explanation when really it means nothing at all. Anyway, don’t worry, something will happen soon and the country will forget about you.” His blackberry beeped and he looked at it. “Well here we go, Paula Abdul is leaving American Idol and Ryan O’Neil made a pass at his daughter at Farrah’s funeral, by morning no one will remember your name.”

I would have preferred everyone know the truth but as long as people weren’t saying bad things about me I was happy. Mrs. President came over with Mommy and Bo. The President asked me if I wanted to play with Bo and I said sure.

I jumped down as Mommy sat next to the President. They enjoyed a refreshing beverage as Bo and I ran along the beautiful lawn and smelled the wonderful flower. For the first time since I met that bad kitty I didn’t have a care in the world.
Posted by Foley Monster, Pocket and River Song at 9:21 PM