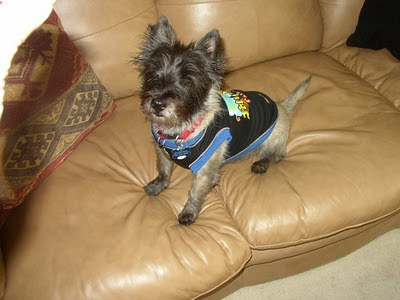 It has been a very difficult period of time for our pup of the week, sweet MacDougal. Last year he lost his Daddy, his play partner, and his Mom doesn't know how she would have made it through that difficult time without her sweet little buddy giving all the love her heart could handle. It seems like no matter what life throws at our strong little pal he can handle. Even recent leg problems have not kept our little Cairn Terrier down.

Then life threw him something quite unexpected. Suddenly, without warning, the earth began to move under his little paws. He gave out a cry, and ran to protect his Mama. Then, while he was running, the most miraculous thing happened, he began to fire poo from his behind like a fortified marine protecting his line in a foxhole.

Now many of us have become frightened at nature with her thunderstorms, howling winds, and rising water, but none of us have thought to fire back at it. Our MacDougal,to protect his Mom from the bad, vibrating earth, lay down a covering fire of poo as he led his Mom to safety.

We all want to take care of our Moms, and sometimes little dogs like us take on some big dogs to do it. But none of us have taken on the Earth itself. MacDougal has shown himself to be a brave dog by supporting his Mom after they both had a horrific loss, shown his bravery by shooting back to save her, and he has proven himself to be a very worthy pup of the week.

Plus, if we ever have the need to take on the castle again, we will be able to do so under the cover of MacDougal's butt fire. He is our secret weapon.

(Editor's note from Pocket Dog: The shooting of poo out the butt happened in a previous earthquake, but Foley thought it made a better story to say it happened in this one. Either way it is something I am very jealous about.)
Posted by Foley Monster, Pocket and River Song at 12:26 PM