Summer Grace and Sandy are our December 19, 2010 pups of the week 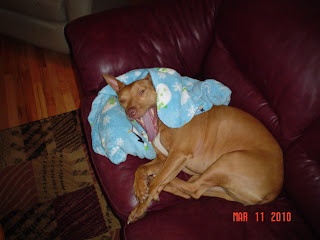 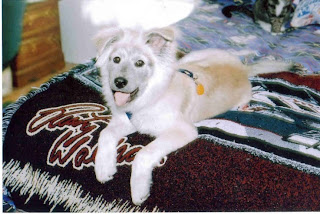 During my many hours of surfing the Internet searching for all things pertinent to pups I read several postings that professed the loss of a limb for a dog was not as traumatic as the loss of a limb for a human.  To this I say Chihuahua chitlins.  Can some hooman produce a list of three legged dogs they have interviewed on this subject?  Did one of these pup experts appear on Larry King?  Has Larry every said:  "Let's go to Hattie Mae in Fredericksburg?"

This month two of our very good friends, Summer Grace and Sandy both needed operations that turned them temporarily into three legged pups.

Beautiful Summer had been suffering from knee problems for some time now.  Then on Thanksgiving her other knee went (hold on, I need to look up the proper medical term) kaflooey.  Plus, to add insult to injury, she also had to go on a diet so she wouldn't gain weight while she was immobile.  Gosh, if you can't run and play, at least they can do is let you eat.

While on the Tanner Brigade injured reserve list (she is listed as doubtful for Sunday) and awaiting surgery her house was invaded by three other pups, and while she made fast friends with them, as she does with everyone, the young pups high energy level caused her Mom a great deal of worry.  Then came the big day and Mommy did everything to make her ordeal as bearable as possible even packing her favorite bwanky.  (Some Mommies may not know this but us dogs really appreciate things like this.)

Summer had to spend a night at the vets.  When she got home she was told no puppy activity for four to six weeks and she had to poop on a leash.  Let me tell you, with four good legs, getting enough slack to get the leash on the ground, positioning it behind you, squatting over it, and hitting it with your poop is hard enoughs.  On two legs it is down right impossible.

Luckily Summer was given some nice drugs, not from the kind of dealer that mishandle your Christmas cards but from nice ones.  They made her sleepy, they made her want to spend all her time of her blue bwanky, but she still manged to poop on her leash.  Bazinga!

Plus they gave her a Brazilian.  I am all for providing health care relief the first responders to the 9/11 tragedy but who will speak for the three legged, forced dieting, pooping on leashes, bared whowho dogs out there in the world?

Her ingenious Mom began asking her friends about how to aid Summer in walking and soon she was able to hop around on her front legs while having her back legs held up.  She also got to eat green beans and pumpkin.  This may sound gross but it has allowed her to increase the power of the only weapon a three legged, Brazilian shaved, dog can wield:  Farts.  Her farts were so deadly it drove the three visitors from her house.

Then her Mommy bought her the best gift a dog could ever have:  A fart fan.  Now she could have the wonderful smell of farts without having to produce them herself.  It was a Fesitvus miracle.  Soon Summer was getting around the house, and even in the computer room where she could communicate with us.

As Summer was going through her ordeal Sandy faced the same ordeal but by different circumstances:  He was attacked by Bambi's butt.  Bambi must somehow have access to the secret Tanner Brigade blogs.  The doe learned how to fire projectiles out her butt MacDougal style.  Sandy dove out of the way and heard something go pop in his knee.

Now poor Sandy was facing the same surgery that Summer had.  But just like Summer he came through it bravely.  And like Summer he got a Brazilian but I don't think male dogs can get a Brazilian.  Maybe he got a Colombian.  Whatever it was damn cold.  He did have an advantage poor Summer did not have.  While Summer only had her Mom as a nurse maid Sandy had Maggie and Bo.  The biggest threat he faced was his Mom drowning him with kisses.

Sandy got his staples out first and his mother was trained in physical therapy.  Or was she?  While she carefully worked his leg it hurt Sandy and he snapped at her.  Who to blame?  Mom?  Sandy?  No the bad trainers and Pocket and I are scratching at the bit waiting to be able to sue the butt thermometers off of them.

Sandy is already back to running around the fastest three legged dog in America.  Summer has some more rivers to cross.  She is going to have another surgery.  Hopefully, after that, she will be as good as new.  But of these pups have shown bravery above and beyond the dog call of duty.

Ans that is why Summer Grace and Sandy are our pups of the week.
Posted by Foley Monster, Pocket and River Song at 9:55 PM