You can spread the word of the birth in the manger, you can promise the babies that Santa is on the way, you can spread merry and bright cheer:  but I know the truth.  This Christmas thing.  It's one giant photo op.

Pocket and I hate the Christmas tree. It's appearance means that we will soon be tortured by our two perfectionist (only when it comes to Yorkie Pictures) parents and posed with flash bulbs blinking at us more than a Kardashian acting like a Slore.

We made it through seven days without getting our picture taken and we began hoping that Mommy and Daddy had found the perfect Christmas cards in the discount aisle at Hallmark.  But on Sunday my faith in a retail giants ability to overstock during the holiday was unrealized  The camera was brought out.  The posing was about to begin.

Luckily, for Pocket, there were no antlers this year.  The antlers don't matter to me.  Daddy tried to put them on me once.  That's why he is known as Three Knuckles.

On Sunday morning Daddy, Pocket and I were relaxing, when Mommy came downstairs with the camera.  Here is one of our dog flaws:  It takes us a few moments to add what is going on during a given situation.  The Christmas tree is up, we spend endless hours shooting Christmas card pictures once the tree is up, Mommy has a camera, run!  By the time this was all computed we were in their arms and being carried to the place where, in their twisted logic, we should be placed to create the perfect picture:  the kitchen table (where they eat, where their grandchildren come and spit up on their toys.)

They put a green blanket on the table.  They arranged a vase full of pretty flowers to be near us and two candle holders.  "Should we light the candles?" Daddy asked.   (Did you see the video on You Tube where the idiot put his two Yorkies on the dinner table on a blanket next to two lit candles in front of a Christmas Tree.  Burned down a three mile block.)

No candles were lit.  Thank Dog for Moms.  We were placed on the table.  Now I am used. to the table.  Some mornings, after breakfast, I can coax Daddy into letting me up there.  I sit on a place mat and get nice scratches and rubs while Daddy looks at the computer and Mommy the papers.  Pocket is not allowed,  She'd go like the drunk violinist on the Titanic:  Plop.

So we're up there.  I'm cool. I know if we just sit still and look at the camera it won't last for long.  But Pocket has never been on the table before, knows she shouldn't be on the table, and can't stop shaking.  Plus Mommy and Daddy are nervous about us falling which makes them jump whenever we move, which makes us jump, and around and around we go.

This is one of our discarded table photos 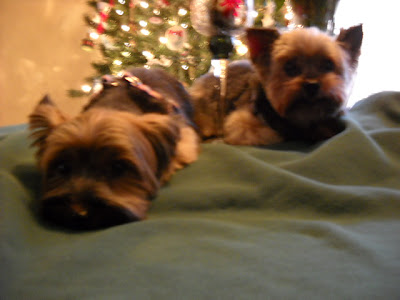 Mommy sat in her chair and looked at all the pictures but decided that none of them were satisfactory.  Daddy said we could pose on the first landing on the steps:  The exact picture we didn't use last year.  Why he is not Presidents I do not know.  They began to arrange decorations on the steps.  Pocket trembled but I assured her we would be back snuggled up as soon as this exercise in futility reached it's conclusion.

One of the props was a reindeer.  We took some totally unusable photos with it last year, but the reindeer had been working out, so we had big hopes for him.  They also put up their tiny Christmas tree and they thought it was just the perfect picture.  Then they added us.

That's when things fell apart.  Pocket had learned that just before the picture was clicked the flash would go off, so that beautiful look on her face was instantly turned to looking like the junior senator from Kentucky during the State of the Union Address. 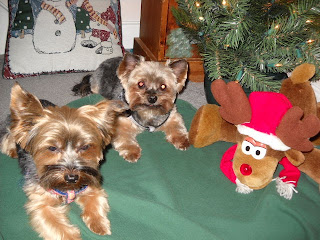 Finally we grew tired of this reindeer and his antics and we went Sarah Palin on his ass.  His is us in our position of triumph. 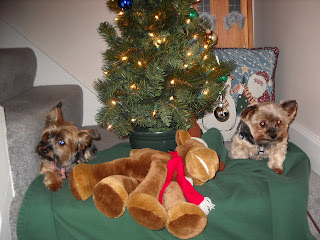 This is it the card we are sending to Mrs.Palin to show her that she is not the only one who can kill caribou in the wilderness.

By the end of the night we were exhausted.  We were lying on the warm afghan a friend of Daddy's made for him.  We were snuggled up close together.

Daddy saw us lying there, the Christmas pillow behind us, the tiny tree lit up behind the couch, and he reached for the camera.  "This could be the perfect shot," he said.  He clicked, and clicked, and clicked.  57 shots later Mommy and Daddy determined that they may have found one acceptable picture.

They took it to their drug dealer today.  I don't know why they get Christmas Cards done at the pharmacy.  They said they were going to the place where they get their drugs to make the pictures.  When I googled the term drug dealer I found some very disturbing things.

I tried to talk them out of it, but they were quite persistent that there was no danger despite non-arguable nationwide crime stats.   They picked out the card, scanned the picture, are picking them up on Monday, Daddy is doing the labels, and hopefully they will be in the mail mid week.   For those on our list, you should have them by the end of the week, except for Luca and Junior.  We pray it gets to you by Christmas.

After that we will make it our profile picture so everyone can see it and tell me Daddy what a bad photographer he is.  Of course this can't be true.  How could you have a bad picture of the two of us?  Unless the drug dealers don't do the cards properly.

Holidays.  So much pressure and such a bother.  I hope you enjoy them. Now Pocket and I are going to eat some reindeer.
Posted by Foley Monster, Pocket and River Song at 10:56 PM