Kolchak and Felix are our pups of the week for December 26, 2010 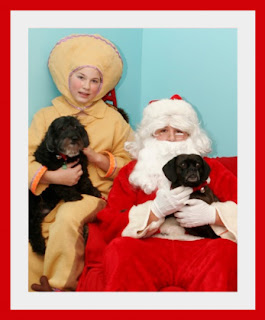 I know, I know.  You're all thinking, these two again?  I do like to spread the pups of the week recognition around a little but when the candidates include these two what can you do?

You could very well be asking why we are recognizing Kolchak and Felix again.  No, it's not because they made us a whole tin of great googa ooga balls that we enjoyed more than anything we had all year.  No, we have picked them not just for one reason, because if it was only one we would have passed them over for some pup who got a splinter in his paw, but they actually gave us two reasons.  I mean two reasons:  what can we do?

The first is the incredible work they did in finding new homes for Sota and Freddy.  In Miss Gina's last days she was  very concerned about what would happen to her pups.  She shouldn't have fretted for a second because she belonged to a group with Kolchak, Felix, and their wonderful Mom, Miss Jodi.

When Miss Gina passed to the bridge it was a body blow to all of us.  Miss Jodi, Kolchak and Felix took it as hard as anyone.  But they bounced back off the canvas and undertook a mission.  Miss Gina's puppies were her heart, they needed a new home, and she was going to find one for them.

Between her and Carol (Lou, Jimmy, Hoppy & Captain's Mom) from DS the pups were picked up.  Within six hours Miss Jodi had worked her magic and Freddy was not only placed, but placed at one of the coolest houses in the entire doggy universe with Tommy Tunes.  That is some magical work.

By December 8 the pups were with Lou, Jimmy, Hoppy and Captain's Mom.  They had their forlorn ovaries removed (I don't know why) got their shots, new blankets and toys,  Then the members of DS and TB came together with wonderful advice and chip ins to pay for their medical stays and to figure out the best way to get them to their new homes.

Sota didn't know it as first but she was already in her new home as she became Lou, Jimmy, Hoppy and Captain's new sister.  Meanwhile, after about a dozen blizzards, Freddy got to go to another wonderful house:  Smoochy's, before it is time to go to Tommy's.  To become so many wonderful dogs sister, even for a short time, had to be a thrill.

To get the full story of all the wonderful pups and Moms who helped, because there are so many I don't want forgrt one,  you can read Kolchak and Felix's blog here http://thetannerbrigade.ning.com/profiles/blogs/freddy-amp-sotas-big-news.

Now, if that was all they did, pup of the week?  Poof.  But, in their spare time, in between finding new homes for Pepsi and Sota, Kolchak's beautiful blind side hit on Bret Farve finally ridding the world of him, Felix's becoming Lindsay Lohan's service dog and barking at her whenever she approaches someone with a flask filled with Glenlivet, and their Mom, who made a million great googa ooga balls for our Fesitvus party, they started the Tanner Brigade Secret Paw group which will puts smiles on hundreds of pups faces throughtout 2011.

So it is our honor to recognize Kolchak and Felix as the last pup of the week for 2010.  They are wonderful friends, great story tellers, brilliant organizers, with huge hearts, and a warrior's determination.  They will find a home for you, bake you wonderful treats, and have dogs you never met send you gifts.

I know there are many other pups who helped with Gina's pups, and we'd like to recognize them all, but the modest Kolchak and Felix have already done so, and will continue to.