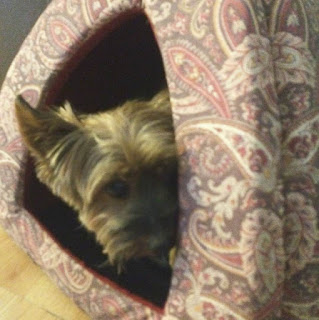 Did you see the video I posted a week ago that featured my barking?  I know what your were thinking.  What an impressive bark from a little dog.  But I must bark impressively.  I don’t want an intruder to come to my door and only see five pounds of terror.  I want them to avoid my door because they think there is a ferocious eighty pounds dog waiting to rip them apart.  That is why I have worked so hard to turn my little arf to a full-throated woof.
You would think my parents would be grateful:  But no.  I do bark at the slightest sight or sound, but you never know when those sights or sounds will become a danger.  I guess my parents find this “annoying” like a tornado siren that goes off after a slight gust of wind
My parents have tried several remedies to curb my barking.  They bought something that gave off a high pitched sound when I barked.  This turned my poop to water.  They decided the barking was less than a problem.  They bought treats.  They were yummy.  Despite the claim on the package, the treats did not stop my barking.  Their next purchase was Rescue Remedy.  Again this turned my poop to water.  They have not been able to find anything to stop my barking, and my watery poop has curbed their efforts to find something.
Now they have bought something called “Stop That!”  How gauche.  When we bark they push an aerosol top, and it lets out this very loud, hissing noise, that sounds like a snake rising from the bowels of the Earth to devour all souls in the vicinity.  This is followed by a strange smell that does not take away the feeling that a large snake is about to devour you, but makes you cool with it.
The first time they used the offending device it did almost scare the poop out of me but did not turn my poop to water, ceasing my main line of defense.  The tactic was to scare us, and then calm us at the same time.  An oxymoron if you ask me, but suitable, since Daddy often acts like a moron and lately I have begun to suspect my mom is on oxy.
It worked the first few times they used it, although I began to build up a resistance.  River immediately caved to it, and her mouth stopped making any noise (even drooling ceased).  I still let out a little “rooo” of protest, but it did make me “Stop That.”
They decided to use it on our walks, where we are known as the little dogs who make all that noise.  So far, I am happy to say, we are known as the little dogs who make all that noise and the parents with the loud spray can that gives off a scent which put the neighbors’ zombified bodies to sleep.
I am still fighting this evil contraption.  It has little effect on me outside, as I believe I was born with the freedom to bark both indoors and out.  It still wins most battles but I am counting on my indomitable spirit and if that fails my secret weapon.
Nothing beat watery poop