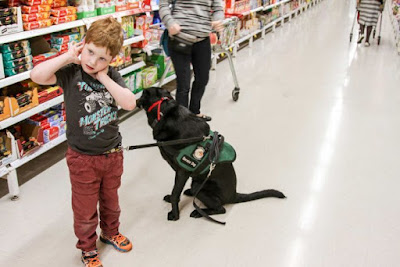 For years we dogs have tried to hide the connection that we have with humans.  Our human companions understood the bond, but when they shared it with non-believers, their opinions were dismissed.  But now, with so many humans in need, we can no longer hide how we can improve on humans lives.
I have written many blogs recently about how dogs can help children with learning disabilities.  I am very moved by these stories, and these heroic dogs make me proud.  So, if you would please indulge me, I would like to tell you about one heroic dog named Jason.
Before Jason came into the Brown family their son Reilly, who has autism, would become overwhelmed in public situations.  When the people and the noise became too much for Reilly, he ran.  When he was three years old this instinct to run nearly ended in tragedy.
Reilly was being watched by his mom.  She turned to talk to a friend, and when she turned back, Reilly was gone.  He left the enclosure, walked across a path, down a hill, and into a creek.  Reilly was unable to understand that entering the creek put him in danger.  Luckily, another parent had seen him and rescued him before he was pulled under the water.
The Browns knew they needed assistance with Reilly in public situations.
It took a year, much research, and $20,000 before Jason became part of their family.  This beautiful dog instantly made his presence worth the wait.
The Browns received two dogs in one when Reilly became part of their family.  He was a happy, goofy black Lab, but, when he put on his service jacket, he became a gentle giant and Reilly best friend and protector.
Reilly has a tether that is attached to Jason, but it is not to keep Jason from wandering away.  Jason is the one who keeps Reilly from being distracted and fleeing.  When Reilly becomes anxious and wants to run, Jason sits down and anchors him to the spot.  Reilly had become housebound after the incident at the creek, but now he can go shopping with the family and go to community outings.  He got to experience a normal childhood again.
At home, Jason is very good at reading Reilly’s mood.  If he gets anxious Jason will either sense it, or Reilly’s mother will say “Jason touch” and Jason will touch Reilly’s hand which will calm him.  Jason’s presence has even helped Reilly sleep.  While Mrs. Brown is reading Reilly a story, Jason will put his head on Reilly’s stomach until he is fast asleep.  Reilly has gone from waking up every few hours to sleeping through the night.
Jason was trained by Katie Hunter, the founder of Dogs for Kids with Disabilities, who has trained several dogs in Victoria, Australia.  She said that dogs could change the lives of autistic children.  "There's always a chemical reaction in the body when you're feeling anxious or stressed or in fight-or-flight mode,” Hunter said,  “and dogs can smell that change, long before we can see it."
Jason has given Reilly a calm, independent life despite his diagnosis.  May many other dogs follow in Jason’s paw prints.