Pups of the Week: Molly, Mouse and Jasper Need Prayers

Prayers, prayers, prayers:  Everywhere I look there are prayers.  They are floating on the river, falling from the skies, slipping down the mountains, growing on trees:  So many prayers for so many dogs.  I have assembled a battalion of Angels to deal with these prayers.  One brigade collated the prayers by dogs; another brigade flew them up to the Big Guy, a third brigade waited patiently outside his quarters for an answer, while a fourth gathered more incoming prayers. 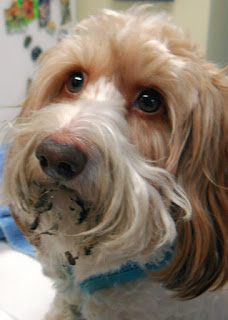 Prayer for Molly our daring, beautiful Dachshund friend who enjoys nothing more than dashing through the woods near her house while constantly on the hunt.  Molly’s had severe food allergies when she was a pup, and her mom learned to watch over her little darling like a hawk.  She became concerned when Molly stopped noticing her mom’s hovering, or several other objects she rarely missed.
Molly went for an eye examination, and the news was not optimal.  Molly was diagnosed with SARDS (Sudden Acquired Retinal Degeneration) which is the loss of function and death of cells in the retina that capture light.  It leads to permanent vision loss with no treatment or cure.
Molly still has 25% of her eyesight, and her parents are desperately trying to retain that.  A very small amount of patients shows vision improvement after taking a drug cocktail.  Odds are not high that the cocktail will work but her parents are willing to try anything to save her vision, while preparing for the worst by retraining her using voice commands such as “left,” “right,” “stop,” and “go” to help her navigate the world and using vanilla extract so Molly can sniff safe spots in the home and lemon extract for not safe places.   Molly has an indomitable spirit, and nothing will keep her from romping on her walks and delighting her parents, but I still ask for more prayers for her vision. 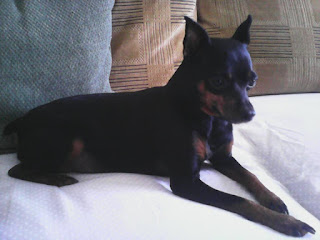 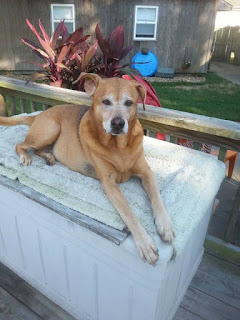 Our final friend in need is Jasper.  This sweet boy has been having seizures for months.  The doctors have not been able to pinpoint a reason for his suffering.  But his parents have watched him grow older and weaker over a short amount of time.  On Friday Jasper laid on the bed trembling, like he had a dream, but with his eyes open.  His parents sent a recording of him to the vet and are hoping for an answer.  We want Jasper back to being the ball of energy he once was, without a hint of suffering, so we ask for more prayers.
In a perfect world, I can report back in a few weeks that all three of our friends were fine.
It would be nice to have a perfect world for once.

Posted by Foley Monster, Pocket and River Song at 6:42 PM

Email ThisBlogThis!Share to TwitterShare to FacebookShare to Pinterest
Labels: Jasper, Molly, Mouse, Pup of the week