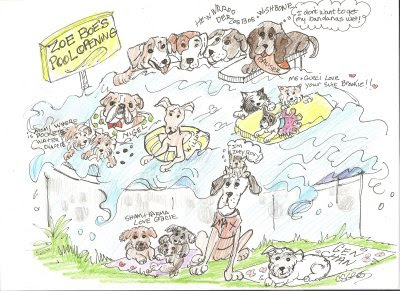 By Pocket (Inspired by Zoe Boe):

On Sunday mornings Foley and I like to sleep late. This Sunday, when the Monster phone rang, Foley just burrowed further under the blanket. But we are still on high alert, and I am Private Pocket, a dutiful solider, and was obligated to answer the call.

I was delighted to hear it was Zoe Boe. She told me her pool was open and a bunch of our friends were going to be there. I said we’d certainly join them. I hung up the phone, went down the end of the bed, and told Foley we had somewhere to go.

Well she said something you shouldn’t say during the heart of a Saturday night, never mind Sunday morning. But I kept nipping her ears, her piggy toes, and her butt, and finally she relented, climbing out of the covers. “Who called?” she asked licking her toes.

“It was Zoe Boe she’s having a pool party,” I said. “A pool party?” Foley said surprised then she bipped me right in the head. “Why didn’t you tell me?”

We got our paw flops, our dog paddle fins, our Yorkie snorkies, then we got into the Monster Machine, set the coordinates for Zoe Boe’s house, and boom, boom, pow, we were there.

We landed right next to Chelsea and Ashton, curled up in the warm sun. “Are you going swimming?” I asked.

“We’re Yorkies,” Chelsea said yawning. “We lie in the warm sun. That’s how we served the King in World War One. Mines are warm. We’d lie on them. The soldiers would step around us to safety, and we were so tiny, we didn’t set off the mines.”

“I thought they used us to crawl into tunnels?” I asked.

”What are you nuts?” Ashton said. “You ever know a Yorkie who wanted to crawl into a tunnel, all dark and cobwebby? That was just Yorkie propaganda. No, we served by laying in the sun.”

“Sounds good to me,” Foley said and plopped down next to them. I began pawing her butt: “We should at least say hi to Zoey,” I said.

“Oh, all right,” Foley said, stretching like she had been asleep hours. She then began to bounce towards the pool.

Zoe Boe bounded over when she saw us and gave us both big, wet kisses. “I am so happy you girls could make it,” she said. “Almost everyone is in the pool, and we have some barbecued squirrel meat, and hot dogs, and hamburgers, and Snausage fingers, so you girls make yourself at home.” She then looked over and saw two dogs talking on paw phones. “But first perhaps you could do something about that,” she said pointing towards them.

We looked over and saw Puppy and Wishbone speaking into their paws. We walked across the wet grass and asked Puppy what they were doing. “I am checking on a dog we placed in a home in Durham and Wishbone is on hold with Governor Mark Sanford’s office about Holland Belue.”

Foley sighed. “Puppy, you’re at a party, and I know you’re committed to save dogs everywhere, but you can relax for one afternoon.” Puppy put up a fight, but finally relented. Wishbone, on the other paw, insisted he was moments away from talking with Governor Sanford.

”Give me the phone,” Foley said. Wishbone refused, but Foley squeezed a chick chick, broke his concentration and grabbed the phone. “Yes, tell Governor Sanford the ghost of Strom Thurmond’s on the phone,” Foley barked. She was soon connected. “Yes Governor Sanford, I want you to fire Holland Belue and take some of that stimulas money to build no kill shelters in your state you incredible hump.” Foley then hung up the phone. “Let’s go swimming,” she said.

“I am going to get the raft because I am the Admiral,” Foley said.

“You’re the General,” I reminded her.

But apparently it wasn’t because Brookie was on the raft being pushed by Chase and Gucci. She saw Foley. “Do you want the raft Foley? I can get off. I just don’t want to get my suit wet.”

“That’s all right,” a disappointed Foley said. “You three look like you’re having so much fun.”

“She’s being pushed by Shih Tzu power!” the Gooch said then made a revving sound and pushed her as Brookie squealed with delight.

“Do you want to jump in?” I asked Foley.

“Not here,” she whispered. “Those Shih Tzus, they are so pretty and puffy, and when they get wet it’s like they shrink three times their size. I can’t deal with shrinkage.”

We went over to the diving board. “Bauser!” Foley said excitedly walking on to the board where Bauser lay in the new Tanner Brigade bandana. “Oh look at how pretty that is,” Foley said.

“Thank you, that’s why I’m chilling up here, I don’t want to get it wet,” Bauser said.

“No that’s too precious to get wet even though I know these colors don’t run,” Foley said giving him a kiss on the head.

She lay down next to him to get caught up and I was tired of waiting so I jumped into the pool on my own. I floated on my back and Nigel floated by me in his float. He told me he couldn’t get his bow tie wet, and he was sipping a puppytini through a straw. He gave me a sip and it almost knocked me right out of the water.

Shortly thereafter Willow floated by in her tube followed by Brookie, Gooch and Chase and I got behind Willow and we raced back and forth through the pool yipping all the way. Then I heard Chase shriek and then everyone got out of the pool except for me and I looked over and floating in the pool was a….poo?

“I did not!” I said. I waded over to it and picked it up. It was a Baby Ruth bar. Foley started laughing at the mean trick she played, but I got the last laugh because Wishbone and Puppy picked her up and tossed her into the pool and she came up all snorting when she got water in her nose.

Soon the Baby Ruth incident was forgotten and we were back playing. Then we got out and laywith Reba on the Gen Chen blanket and talked about all the cool mutts we knew. Sham and Karma were playing with Gracie on a blanket, rubbing her tummy, and Gracie was squealing with delight, and then we played catch the puppy. Max gave me, Zoey, Foley, Ashton and Chelsea rides on his head and we felt like the most beautiful Princess in the highest tower.

Soon it was getting dark and we all had to kiss and say goodnight and we were in the Monster Machine and back home, and we were so tired that we curled up under the blankets and went to sleep.

I had forgiven her for throwing a Baby Ruth in the pool and making everyone think I had pooed in the pool because Foley is my sister and I love her.

Plus I’m pretty sure I peed in the pool a little.
Posted by Foley Monster, Pocket and River Song at 10:13 PM