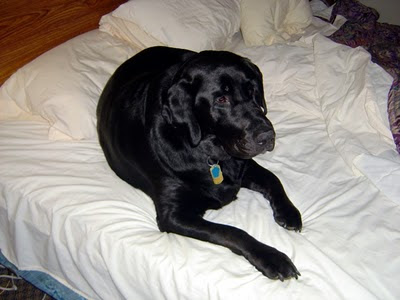 I have noticed many traits in humans that prove they are not as evolved as pups. One of them is their inability to patiently wait. Humans fidget, they pace, they check the bright digits in their electrical boxes, and, whenever what they are waiting on finally arrive they become angry with it for not appearing on their schedule.

Now us pups we do worry. We worry about our humans from the minute they leave the house (they are off leash for gosh sakes) to when they return home. If it is for a long period of time we might not eat, or sleep, we just vigilantly await our parents' return.

The reason that we are more evolved than our humans is when the person we are awaiting for arrives we don't meet them with anger or sadness, but with more joy than can be contained in even the largest pups' soul.

Which brings us to our pup of the week, one of the sweetest, funniest, most clever dogs we know, the one and only Smoochy.

I am sure that you have already read his blog, but to summarize it, Smoochy has a doggy door which he uses to do his business. He is a very good dog and would never go in the house. On Friday night he used the door and returned inside to be with Mom. To stop a dreaded chipmunk invasion she closed the door behind him.

She had to work early in the morning, and because she was exhausted from the night before, overslept and had to hurry through the morning, of course not forgetting to feed Smoochy, or give him some water.

Well her slave driving boss kept her late at work again and when she returned home Smoochy was his usual happy self, overjoyed to see her, squeaking Miss Giggles, and doing the dance of joy. Smoochy got an Applebee's hamburger. He did whine a bit but he still waited because he knew his Mom loved him and would tend to his needs as soon as she was able.

When she went into the bedroom, and saw the doggy door was shut, she realized that Smoochy had not peed for 16 hours, and, knowing that he was suffering, she began to cry as she opened the door. But Smoochy chose to lick his Mommy's tears then relieve himself and the only way he would go out is with her at his side, so he knew she was all right. He then set a record for the longest pee ever, which was broken a week later by 2,000 people getting off a Carnival Cruise ship.

So why is Smoochy pup of the week? Because while he was left alone for hours without a bathroom he didn't meet his Mom at the door with annoyance or anger like a human would have but with all the love his heart could hold. And even going 16 hours without a bathroom break he did not pee on the floor he waited for his Mom knowing it would be wrong. (Me? I would have peed after about 10 hours. Pocket? She wouldn't have lasted before Mommy got out of the driveway.) And, when finally given the chance to pee, he made sure his Mom wasn't sad before he did.

And behind every great Pup is a great Mom, who put this quote on her blog (and Smoochy even forgave her for hijacking his blog), which is a wonderful tribute to Smoochy and pups everywhere:

“He is your friend, your partner, your defender, your dog. You are his life, his love, his leader. He will be yours, faithful and true, to the last beat of his heart. You owe it to him to be worthy of such devotion.”