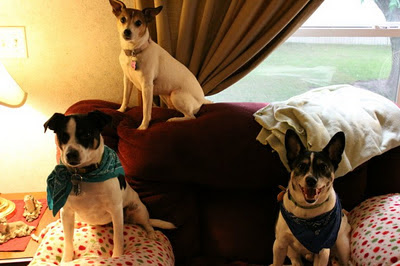 There is a joke by the human comedian Bill Cosby. I am not a big fan of human humor, Fozzy Bear is more my style, but I thought he raised a good point. He talked about, as the father of a male athlete, you get up early, take him to practice, take him to games, pay for the uniforms, pay for the equipment, work with him in the yard, take him to colleges, and, when they score a touchdown, and get on TV, they look in the camera and say "Hi Mom."

I think, as dogs, we are guilty of that too. Those of us who have Daddies, while we love them, we really are Mama’s dogs. If Mommy is gone we might be sitting with him, or playing with him, but when Mommy appears, boom, we’re gone.

And Sydney’s. Buddy’s, and Moose’s Daddy, well he’s a great Daddy. He’s not one of these Daddies who think of dogs as one of Mommy’s little “distractions” to keep her happy. He is a true Daddy to his pups, making sure they go with him on ride, on vacations, to car shows. He’s the type of Daddy that, when a pup tells us they long for a Daddy, we wish they had.

And he is the kind of Daddy, like my Daddy, who understands that an afternoon with their dog is an afternoon well spent. He takes cares of Buddy, Sydney and Moose like he takes cares of his family. He did such a good job taking care of his family that his son. Jordan, inlisted in the army and went to Afghanistan to fight for our freedom. What better example could a Dad set?

Now the good news is that Moose’s, Sydney’s and Buddy’s Daddy has a lifetime to live. The bad news it that it’s one of our lifetimes to live, which, everyone who has ever loved a dog before knows is way too short. He has medication to take away his pain, and he has the love of a wonderful wife, a strong son, his family, and three beautiful dogs to make him feel like the best Dad in the world.

Which is what he is.

So we raise our tails in salute to Moose, Sydney and Buddy. We vow to help their Dad, and their Mom and their family through some hard days and to celebrate their good days, because we are all one family and they are an important part of it.

And for those of us with Daddies, let’s not take them for granted, and to snuggle up to them too, because they are as deserving of our love and our Moms. 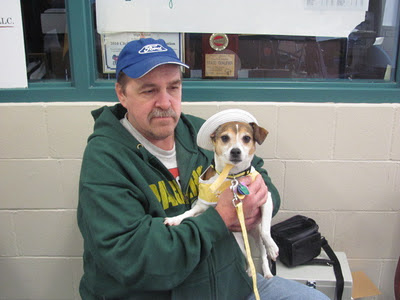 Posted by Foley Monster, Pocket and River Song at 9:53 PM