November 18, 2011
Oh nobody knows the trouble I have seen this week. On Monday I got a cut, due to totally irresponsible walking by my Daddy.

My less than attentive parents didn’t notice the hitch in my gait until I jumped off Mommy’s recliner on to the hardwood floor and while my back legs and left front foot moved in my normal, graceful trot, my right leg Yamaguchid all over the floor. Pocket noticed. We usually attack one another when one of us is lame but she just laughed thinking I was doing an imitation of the previous Monday’s Nancy Grace dance elimination dance.

I hobbled for a drink of water. No one noticed. I swear I could spontaneously catch fire one day and my two slack jawed parents wouldn’t turn away from the bad dancing they are enthralled with on the television. Finally Daddy noticed and he helped me into the recliner. He tried to check my paw but screw him! He couldn’t bring the water dish to me he doesn’t get to play with my toes.

Truth is my pads really hurt. Daddy took us out on our last business trip of the night and I was moving like Ryan Howard making the last out against the Cardinals. Then we came in and Daddy held me while Mommy began to look at my paw. Hello! I highly doubt either one of them are medical professionals. And this was my favorite paw. It’s the one I use to paw at people to get them to pay attention to me. I wanted to be left alone. I knew how to fix my paw. It just needed a few hours of licking.

But no! Mommy, who has no medical experience, and doesn’t even have paws, thought she knew better: control freak. So first she picked up scissors, and, with no grooming or barber experience, began to trim the hair around my injury. Talk about your delusions of grandeur! Cutting my fur? She should be the Patriots trainer. Tom Brady gets a concussion she can run out there and shave his head. Anyway she cuts the fur and determines that I have a cut between what we call, cutely, in our house, my piggy toes, but on this night I referred to as the (boolahlah) things that were paining me. She hands me off to Daddy, the igor to her Frankenstien, and then she came back with a Dixie cup, which I thought was to put my hair in so it could be sold on e-bay but actually contained some liquid that smelled funny and then, while Mommy held the cup, Daddy tried to put my paw in the cup, which, while being exactly the same plot of a Tiger Woods sex tape I downloaded, when he finally overpowered me, and stuck the paw in the cup, made me scream “oh, sweet, fancy, boolahlah!” Then, to top off this botched operation, she squeezed the paw with a towel, which dried it, and made my eyes bug out of my head like Rerun on What’s Happening when he found out there were no cheeseburgers.

Then I got put in bed where I could finally give my paw the medical attention it needed. I lay in bed and licked my paw. But then Mommy got in bed and Dr. No Diploma told me I could not lick my paw. Was she crazy? This is the only way it would heal. I licked, she swatted my butt. Lick, butt swat, lick, butt swat, lick, butt swat. The entire thing not only totally reenacted the Kardashian-Humphries wedding night, but lasted longer than both their foreplay and their play.

I finally fell asleep despite the pain. I woke up and gimped through my morning business. I then sat in my chair next to Daddy and licked my paw. But Mommy got up and not only did she tell me to stop, she took one of her tiny socks, and put it on my leg, and taped it securely with package tape. I was frustrated, humiliated, emasculated, predated. And when I got to the floor, which, as if laid out by Jeff Probst before a Survivor challenge, goes rug, hardwood, linoleum, just to mess with me, had me slip sliding away.

On Wednesday there were no more socks, I think Nurse Rachett had taken some pity on me. And my foot, thanks to my licking, was getting better, except when they stuck my foot in that boolahlah Dixie cup of pain. But I still limped around because Daddy was carrying me a lot since he hated to see me limping, and I decided to milk this thing until I got tired of it or someone dropped their sock.

But by Thursday I forgot to limp and getting carried was over, and so was the butt slapping, which I had grown to love, and the Dixie cup of doom. Mommy says it was from her stopping me from licking it but I know the truth. It was my magical healing tongue that did the job.

If only Kris Humphries had a tongue like mine he would still be married. 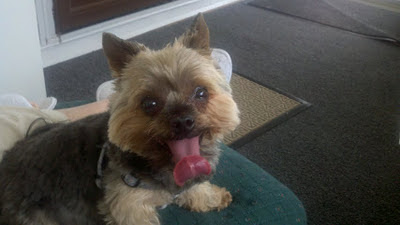