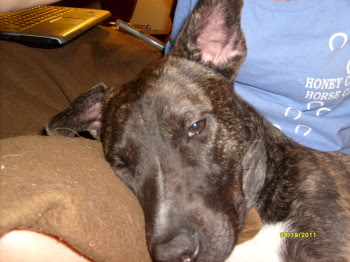 Tiger’s life started out like a morning nightmare. Thankfully the rest of his life will be filled with sweet dreams.

He began his life locked inside, no feeling of sun on his fur, no smells of nature drifting into he wet nose, no tongue tasting everything that looks interesting. Because, as he said in his first blog on The Brigade, he had hit the jackpot. He got fostered by Sierra’s and Nase’s Mom. Jackpot indeed.

From a cold hard surface Tiger got a fluffy pillow in his crate. Food came at a regular time each day. Water was always available. And the food was so tasty. Like nothing he had eaten before. When he had become fostered he was too thin but with all the good food that problem was quickly righted.

And it took Tiger no time to get himself up with the rest of his pack, the wonderful Sierra and beautiful blob Nase, who gave up precious love time from Mom, and precious mattress space, to allow Tiger to sleep on the bed. At first she said it was for only one night. But the next night Tiger jumped right up there on the bed again and his foster Mom didn’t have the heart to tell him to get down. It was here that Tiger found his first great unknown talent. He is an excellent snuggler. And in that bed, in that snuggle, for the first time Tiger felt love.

Not only did he get to be loved, her got to be a dog again. He wrestled with Nase. Sierra warmed up to him quickly, sensing an ally in her battles with Nase. Sierra ever forgave being run over by Tiger when he was racing Nase in the backyard. Sierra watches over them and interferes with her big snapping teeth if things get out of control.

When the story of his first days as a foster pup with Sierra and Nase were told we all responded the same way. Tiger was not in his foster home. Tiger was in his forever home. And this week we found out we were all correct.

Tiger was overjoyed when he told us the news, jumping up and down, barking that he was in his forever home. He told us with great pride he had a Mom, all his hopes, his prayers, his wishes, had come true. He had everything he ever wanted, a loving Mom, a mentor in Sierra, and in Nase a playmate and a bother all rolled into one. As Tiger said, he and Nase became the terrible twins.

As Tiger reminded us in the blog announcing him as our newest member, that there were still many pups left in shelters, and, while rejoicing in the joy he found, he asked us to pray for those left behind.

Which is why he is a very fitting Pup of the Week.