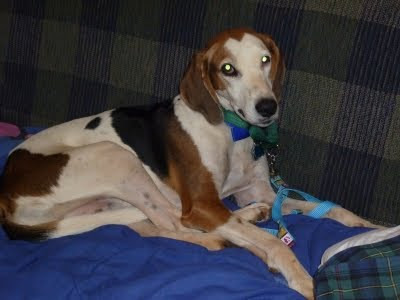 Like Harry Potter Wishbone is the dog who lived.

I first met Wishbone shortly after he was saved for the first time. He was a coon hound who wasn’t good at hunting. His owner thought a dog that won’t hunt ain’t worth the expense and planned to have him killed. But in came the force of nature known as Paula Malatestsa and she saved Wishbone from certain death.

But Wishbone, having narrowly escaped the Bridge, was a very skittish dog. When he got his first chance he bolted out the gate and into the wilds of North Carolina where dogs are nothing but property and they put dogs down if they stray on to the road. Miss Paula was distraught. She looked everywhere but there was no sign of Wishbone. On Sunday she went to church to pray for her boy.

When she came out of church she looked down a hill and saw Wishbone. Decked out in her Sunday best she went running down the hill to save her boy. Wishbone saw her, running, then tripping, then rolling, down the hill, and said “well how ‘bout that.” He was so surprised he didn’t run. Paula got him and brought him back home were we all thought he would be safe for a long time.

But then tragedy stuck. Paula became sick. She had to go to the hospital. Her dogs were left unprotected. The wicked witch of the south and her little monkey showed up and began to gather the dogs up. Having smelled the lust for death on a human before Wishbone knew to run. They were unable to catch him. But the majority of his brothers and sisters were sent to the bridge and again poor Wishbone’s future was very much in doubt.

When Paula got out of the hospital Wishbone ran to the one person on this cold planet who had ever shown him any kindness. But Paula could not longer keep all the dogs she had, having to flee her house to protect her dogs. Wishbone would have to be put up for adoption, and quickly. Our DS friends, Apple and Blossom, from New Hampshire, stepped up and said they would be happy to take Wishbone.

Paula’s sweet daughter drove with Paula and Wishbone to the North where they met with Apple’s and Blossom’s Mom and Paula said her sad goodbyes to Wishbone. He went up north to a strange house without his Mom, his human brother, and his pup brother and sisters. But Wishbone knew one thing was the same. It was a house filled with love. And he knew that he was finally safe and his his forever home.

Now Wishbone is a Northeast dog. He romped in the freak October snow he had. And the other day his young human sister had to stay home from school and Wishbone stayed by her side protecting her from the sickness that had invaded her body.

So this is for Wishbone. The pup who lived. The pup who has slipped away from a ticket punched for the bridge twice. It seems he has found peace and harmony in his new home. Let’s hope it’s a long life for this most deserving dog.