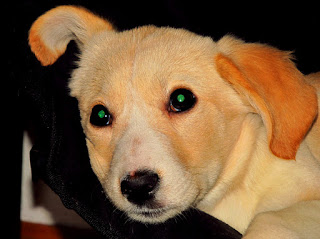 Christmas is a time for many things. Three of them are old friends, new friends, and miracles. The Pet Pack managed to provide us all three in a spawn of five days.

We had only heard from the Pack once since May of 2010 when they came back to our dog park and barked that they were here to stay. They also introduced us to a new Pack member:

Her name is Cinnamon, she is a lab mix, and came from the shelter her Mom works at. She was a Christmas gift to the family. She is sweet and fit right in with the Pack. But as soon things went terribly wrong. She became very sick. Her breath and her ears reeked. She had come home the most playful of pups but now she had no energy. She only wanted to drink water but her nose very dry. She had terrible diarrhea, just liquid squirting, with continuous accidents. Her Mom made a vet appointment for her and asked for prayers.

Her Mom also spent as much time with her as she could. She fell asleep in a chair with her for two hours. That night Cinnamon had three messy poos while her parents slept and then two more after they awoke. Then worms started appearing in her poo which is very bad. At this point her Mom was praying that it is just worms in her intestines and not something else..

Well when Cinnamon got to the vet she was just a champ. The vet did a thorough examination and determined that she was malnourished, had roundworm and had Giardia, which, I assumed, but was happy to learn from Pocket, was not an STD. But they were all very serious illnesses.

Everything that she was suffering from was a result of maltreatment from the terrible people who owned her before she joined the Pet Pack. If they were going to surrender her why did they they have to torment her before they gave her up? They starved, abused, and burned her, and they kept her in such cramped quarters that she got the Giardia from drinking water with feces in it. Hopefully those terrible people don’t have any more dogs. . But luckily Cinnamon went to the right shelter and found the right Mom to save her.

The vet wrote out a prescription for some medication and told Cinnamon’s Mom that she should be back to a normal puppy within 48 hours.

By Christmas Eve another miracle had happened for Cinnamon. Not only had she been adopted by the best family but she was back to being a playful pup. But she had a blue Christmas, because, in her desire to help her Mom get a paw print, she painted half her body blue. She got a bunch of great gifts which must have surprised her so much considering the horrible life she had pre-pack.

So here is to Cinnamon. A Christmas Gift to us all, who went from a horrible home, to the shelter, to a wonderful home where she got very sick, but luckily had a Mom determined that she get better, who nursed her back to health, and gave her new toys, but more importantly a new life on Christmas Day.

So a tip of the tail to Cinnamon, the Pet Pack, and their wonderful Mom.
Posted by Foley Monster, Pocket and River Song at 10:11 PM