The Superior Adventures of Zoe Boe 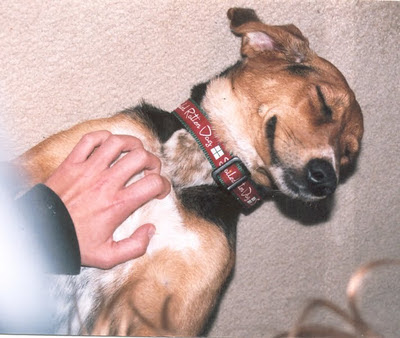 Zoe Boe is a good friend of ours. She is very sweet and docile. But this week we learned something remarkable about her. Zoe Boe is a super dog, called to help humans in need who flash their Zoe Boe signal off their smart phones. When Zoe Boe sees her signal she runs outside, leaps in the air, and takes off tracking the source of the signal.

Earlier this week she saw it shining in the sky to the West. She flew there within minutes. She landed at an airport. One of those silly men in the brightly colored suits and ear phones ran to her. “What is the problem citizen?” she asked.

“There is a bad man on the plane with a hand held device. We don’t know if it’s a bomb but he’s ranting and raving. Zoe Boe you are our only chance!”

Zoe Boe put a reassuring paw on the man’s shoulder and told him to keep everyone away from the plane. She then took two steps back, ran towards the plane, jumped on the wing, slid to the window and clawed at it until it was open as she gained access to the fuselage. .

There was a tall man sitting in his seat, unbuckled, holding the device in his hand. He had nice hair, slightly overweight, the kind of man who might have looked good 15 years ago, the type of man who had several brothers not as successful as him. Zoe knew she was dealing with one of the most dangerous of beings. An enraged Baldwin.

Zoe Boe approached him carefully, her ears alert, her tail high behind her. Several airline hostesses were hiding in a corner. Zoe looked at them and winked. She then turned to the aging star of the overrated sitcom. “Citizen, I need you to control yourself, you are scaring the other people on the plane.”

He thrust the device at Zoe Boe. It was an I Phone. On it was a scrabble game. “Look at this!” the enraged man screamed. “Are you going to tell me that zoa is a word. Zoa? Has anyone ever said they were going to go out and get an ice cold Zoa. And Qi? What the heck is a Qi? I hate this game. I hate it. Never play Friends With Words with a woman named Fey.”

Zoe knew nothing calmed an out of control man more than a good snuggle. She jumped in his lap. This caused his arms to be trapped so he could not see the phone. He stroked her ears and then looked at her with misty eyes. “I am sorry, you’re a good dog and I was out of line. It’s just this game it drives me crazy. These words no one has ever heard of. You know I used to be the star of major motion pictures. Now I’m stuck on a sitcom with a black guy who reads every line the exact same way and a woman who gives herself all the good lines. I just don’t feel wanted.”

Zoe smiled at him sadly. “You know once I was a pup and no one wanted me. I was going to be killed by my owner but a wonderful woman came and saved me and now I have the best life. Just when you think no one wants you, you find out how loved you are. So I am sure that someday you will find a home at a major movie studio and that will be your forever home.”
“You are the most wonderful dog,” Baldwin said.

“Why don’t you say we get off this plane, I bet you the next one will have the owner of your forever major movie studio on it.”

He asked her name..

“Zoe Boe.” Then he asked if there were more dogs like her in the world and Zoe told him yes, and they were collectively called Zoa.

He smiled and tears fell down his face. Zoe then led him down the aisle and out of the plane. The flight crew thanked her but she told them there was no need. This is why she was here.

She gave Mr. Baldwin a lick and left him to meet the head of his forever movie studio and she flew home to gratefully snuggle with her Mom.