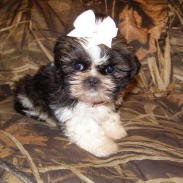 Foley sat behind her desk, turned away, absent-mindedly looking at a squirrel on the lawn playing with his nuts. The desk was only a few inches high, and the chair only half that, but Foley still felt very important sitting behind it. In a chair on the other side of the desk was Pocket. She was not sitting how Foley had wanted, with her butt in the seat, her forelegs hanging uselessly in front of her, her back legs hanging off the chair; but she was curled up like a dog, licking her paws, and wondering what tasty delight she had stepped in.

The phone buzzed and Foley tried to reach across the desk to hit the speaker button, but her arms wouldn’t reach, and she barked out for her secretary to come in. Zoe Boe walked in and told Foley that her 3:00 was here. Foley asked her to give them a moment and then watched as his long legged girl Friday wiggled out of the room. “If you were going to gawk at our secretary you should have at least got a boy dog,” Foley said.

“First of all I am neutered so I’m not attracted to anyone’s butt but my own. Secondly, I did have a male secretary, Wishbone, but he filed everything under W and I had to let him go. Thirdly, when I’m bored she draws me pretty pictures.”

The door opened and a Shih Tzu puppy, black and white, came into the room sniffing everything in site. Then she stopped and peed on the rug.

“Hey are you replacing me?” Pocket asked.

“No Pocket, we all have roles in play in the Brigade, and excitable pissing is yours, no, our friend Grace just had a little accident isn’t that right?” Foley asked to his guest, Grace Earnest.

“Yes, I do,” Foley said. Pocket relunctantly reached down from a bag at her side, got a cookie, and placed it on the chair where Foley wanted to conduct her talk. Gracie ran towards it and after several jumps got in the chair.

“Pocket, this is Gracie, she is Teddy Bond’s new sister,” Foley said.

“It is nice to meet you,” Pocket said.

“Now Grace,” Foley said. “Do you know why we brought you here?”

“No, no. OK, yes, give her a cookie.” Pocket sighed, her cookie supply getting diminished by the second. “You are here because your brother left us all his spy gadgets to give to you and we are going to do that today…..Pocket what are you doing?”

Pocket had climbed across her chair and was burying her nose in Grace’s fur sniffing her. “I love that new dog smell,” she said.

“Stop it your embarrassing us,” Foley said. He turned back to Grace. “Now Teddy left me a bag of tricks so let me look in here and see what we have.” She pulled out what looked like an ordinary bone. Foley studied it but did not see anything special about it and threw it on the floor.

Grace hopped down and took it in her mouth and began to chew it. When she bit down on the bone it sent a laser across the room that shattered a lamp. Foley and Pocket jumped down and hid under the desk as lasers flew through the air. They heard the door open and the soft pitter-patter of a sleek lady then the lasers stopped. The girls lifted their heads from under the desk where they saw Zoe with the bone in her mouth. “Foley, how many times do I have to ask you not to give the puppy the laser bone?” she asked.

Foley got out from under the desk, licked her fur to straighten it, jumped up and sat, and said: “Thank you Ms. Boe, that will be all.” Foley looked down and pulled out a camera. She turned in over. “Oh it’s his penis cam!” she said.

“Teddy had it inserted in his penis and whenever he licked himself he took a picture.”

“Wow,” Pocket said. “That’s a lot of pictures. I don’t think we should give it to she doesn’t have a, you know, the p thing.”

Foley slid the camera over to her and Grace ate it. “Well, at least we’ll know if she has worms,” Pocket said.

Foley went back into the bag and brought out beans. “Was Teddy building a bean stalk?” Pocket asked.

Foley looked at Teddy’s written note that said “do not eat after midnight,” and noting that it wasn’t after midnight he tossed Grace a bean and that puppy caught it in her mouth.

She chewed it and swallowed it down. Foley and Pocket studied her but nothing seemed to be happening. Foley looked down at the last item in Teddy’s bad which seemed to be cookies. She was going to eat one herself when she stopped as something foul filled the air.

“I think I am going to die” Pocket said gasping for air.

“No, fatal farts are great. Oh God my eyes are watering! Zoe!” The door opened and Zoe sprayed air freshener into the room while holding a paw over her nose.

Foley took the cookies out of the bag and used it to clear the air in front of her face and Grace jumped up on the table a wolfed down the cookies.

The Grace slowly lifted into the air. “Oh my they are flying cookies!” Pocket said. Grace floated over their heads.

“Look at her she’s a flying Shih Tzu!” Foley said in awe.

This was followed by a clicking sound “And I think she’s taking our picture!” Pocket cried and then they both dove under the desk.

She held Gracie until she air ran out, placed her on the ground, and told her to scoot on home.

She then walked over and picked up Teddy’s magical bag of tricks in her mouth. “I will bring this back when Gracie is old enough to appreciate it,” she said.

Chagrined, Foley and Pocket waited under the desk for Zoe to leave the room. Then Pocket gestured with her nose at the two magic beans and cookies that had fallen on the floor.

“That the world needs a flying, farting Yorkie?” Foley replied.

The two sisters scoffed down the cookies and beans and then floated in the air, barking in joy as they bounced off one another high above the office floor.
Posted by Foley Monster, Pocket and River Song at 9:04 PM