Beauties and the Geeks

For the past two weeks the laptop I use to run the Brigade and do my blogs has been acting erratically because of a frayed power cord. I sent Mommy and Daddy to Best Buy two weeks ago. I had purchased the protection plan with the computer so all I needed them to do was get a new cord.

Well, sometimes I think I need to talk to Hobo about hiring some cats because they didn’t come home with a cord, they came home with a slip, saying they would send a cord in five to ten business days. I didn’t get angry. It was my fault. You can’t send a human to do a dog’s job.

On Thursday my laptop just stopped working, but Daddy said it would be fine, that the new cord had come in. I ripped open the box, pulled out the cord, and it was the wrong one!

I dropped the improper cord at his feet, and stormed into the fuzzy condo where I spent half the night. On Friday Daddy dressed me in a business suit and took me to work with him, saying I was an exchange student from Guam, and allowed me to sit on his lap and get some work done but wouldn’t work every day.

So today the Monster Brigade invaded Best Buy to make some Geeks squirm.

When we entered the store the door Geek stopped us with his totally racist opinion that dogs cannot enter Best Buy. My Mom was carrying me so I stood in her palm and told the Geek to turn around and look at his clientele: Two glasses wearing, white shirt sporting, teenagers play Doom II on the Play Station model; a fat guy watching the Notre Dame game on the wide screen while his wife slipper shopped at Macy’s; two small chested, thong exhibiting, tramp stamped, pimply, high school girls who struck out with the boys at The Limited and were slumming for Geeks; and two Haitians arguing with a Geek about a steam cleaner. The Geek allowed us access.

My Mommy said that she would handle this. Of course if she had been able to handle this from jump street Pocket and I wouldn’t have to be here. She explained to the Geek that they got the wrong cord, and the Geek told her that there had been an adapter in the box, that we must have thrown it away, and they would order us a new one.

“Will we have to wait two weeks to get it?” she asked.

“No only five to ten business days,” the Geek said.

I stood on the counter and glared at him with my brown eyes. “Hey Stephen Hawking!” I said. “Ten working days is two weeks. What’s the square root of Duh?”

The Geek told Mommy there was nothing he could do and she asked to talk to a manager. When the Geek left to get the Geek in Chief I nodded to Pocket and we each jumped down. Pocket ran to the video games section and I heard a Geek yell: “Oh, this dog just went pee next to the Wii!” Meanwhile, I began to hump the Season Three Box Set of “The Office,” (I would not hump Season Two, it’s not hump worthy); Pocket moved over to the digital camera section, leaving more water, and causing the high school audio visual teacher to have a slip and fall accident while I chased a Geek with Yorkieaphobia through the cell phone area.

The Chief Geek came running towards Mommy and Daddy, his pocket protector bouncing like Pam Anderson’s chest used to bounce on Baywatch, and he asked Mommy what was going on and Mommy said that this would continue until she got her cord. “I’ll do it, just tell that dog to stop peeing!” he said.

I had returned, looked at Pocket, and said, “That is not her peeing position,” and then the Geeks ran out of the store like the High School football team had just arrived.

Suddenly, they had a cord, and an adaptor, and let us keep the cord they sent us too, then ushered us happy group of Monsters out the store before we could cause any more damage.

So I am back, up and running, as you can see and read, ready to manage and blog. Meanwhile, if you go to our local Best Buy, beware of trembling geeks, and don’t step there, there, or most importantly, there. 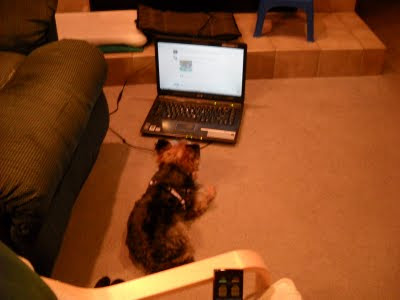 Posted by Foley Monster, Pocket and River Song at 8:41 PM