Well this was a tough week to pick our Pup of the Week. Pocket and I spent most of the day discussing the candidates.

We are very worried about our friends Pepsi and Ladybug. We are praying they are going to be fine. Also our hearts are breaking for Roland and Savannah who lost their beloved kitty Oreo.

Pocket kept coming back to one of her favorite candidate, a Yorkie with a bad tummy who is running for Senator. I had to keep saying “Pocket that’s you.” She kept saying “Who is you?” I said “I’m Foley,” and then we’d go around again in a big mess like the Cowboys offense.

But we finally settled on a pup for several reasons. (1) Her Mom did a wonderful thing; (2) while she may not have realized what a wonderful gift she has received I’m sure she will soon; (3) We chose the older of the two pups because she has had lots of change in her life recently.

So, our pup of the week is Josie the Grouch. (This also dovetails nicely with the 40th anniversary of Sesame Street.) 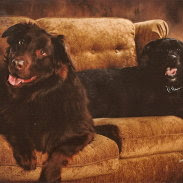 First, kudos to her Mom: While in her local police station she saw a poor, unloved, starving pup, and brought it home, to give her love, and a life. Now Josie and her brother Koda did not react well when this pup, beautifully named Bella, was introduced to them, but there are many reasons humans don’t understand that trigger this behavior.

Dogs carry so many smells, of other dogs, of fear, of pain, that sometimes when we’re introduced to that smell we react poorly. I am sure the more Josie is around Bella, and the cleaner and more pleasant smelling she becomes, she will fully welcome her as a sibling, and teach Koda to do the same.

And, as an added inducement, may I say that Pocket and I have awarded the second Pup of the Week to Josie, and if she doesn’t accept Bella as a sibling, we could end up looking really bad. So, if you can, think of your two sexy little Yorkie friends and remember our sterling reputations.

But I know you won’t have to do that. You may be grouchy, but you are a beautiful and smart dog, and you are our Pup of the Week.
Posted by Foley Monster, Pocket and River Song at 9:22 PM

Email ThisBlogThis!Share to TwitterShare to FacebookShare to Pinterest
Labels: Pup of the week. Josie