Pocket and I have decided that it would be really cool if each week we awarded one of our dogs the title “Pup of the Week.”

We are going to be looking for a pup who did something special that week, or had something bad happen to them, illness or accident, and either the pup or their family need a little pick me up.

There isn’t going to be any set rules about what you can do to win, and can’t do, to win. Pocket and I are going to go through the blogs and comments during the week and pick a winner. We will try to spread the wealth a little, we don’t want the same dog winning six times a year, unless they’re a very special dog, but we can’t promise everyone will win either. As always we will do our Yorkie best.

Unfortunately there is no prize for being Pup of the Week except the love and respect of your fellow dogs, and the recognition of your achievements, which, I am sure, is prize enough for our friends.

So for this week, the inaugural winner of the Tanner Brigade Pup of the Week for the week of November 8, 2009 is…….Nase.

For the wonderful work he has shown in obedience school, for at five months learning how to sit, stay and come, for doing it the best of anyone in his class, and for implementing that knowledge by coming when his Mom called him even though he was far away and it was dark, Nase is our Pup of the Week.

To go from nothing but a Blob to the valedictorian of five month old obedience school is an achievement well worth celebrating, so congratulations to Nase. 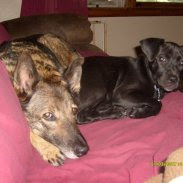 Posted by Foley Monster, Pocket and River Song at 9:33 PM

Email ThisBlogThis!Share to TwitterShare to FacebookShare to Pinterest
Labels: Nase, Pup of the week