The Bownight Show with Foley Monster

Now that I have successfully driven Conan O'Brien off the air and pushed Jay Leno back to 11:30 Pocket and I will be taking over the 10:00 time slot at NBC whenever we are awake for more than an hour and remember we have a show. This is the transcript of our first effort

Pocket: From the Tanner Brigade Home Office it's the Bownight Show with your host Foley Monster. Foley's guest tonight is recently elected Massachusetts Senator Scott Brown, with Cocoa Puff and the All Labrador Band, and me, I'm Pocket Dog, and now here's Foley.

Foley: Thank you, thank you. Please. Did you see the big football games yesterday? More dropped balls then at a male puppy obedience school. You don't drop your ball when you're carrying it do you Pocket?

Foley: Pocket and I had an interesting weekend, we went baby sitting for Daughter #2. She has these two, tiny little people, we call them Grand Daughters #3 and #5. It's like ordering from a Chinese Menu. I'll have to #3, and a little of the #5.

Foley: Air makes you gassy. So we get there, and we're both carried in, I because, as you know, I'm the Queen and I deserve hailing, and Pocket because when her feet hits linoleum she's peeing.

Foley: Well you spend more time excited then Tiger Woods at the Hooters Open. So we get there, and these two little children, they come at us like tiny Frankenstein Monsters. The smaller one, she runs with that rocking back and forth motion like she's Otis trying to pass a sobriety test after a night of Foley-tinis. And the thing is the cat is going to carry Otis home. The cat's the one they ought to be testing, Otis is just going to lie there passed out. Do we have a picture. Yes, here's Otis failing his sobriety test.

Pocket: Friends do not let friends drink and ride cats.

Foley: Thank you for the PSA. The pissing service announcement. And this is the cat, so, you see what I'm saying, I don't know whose driving who. 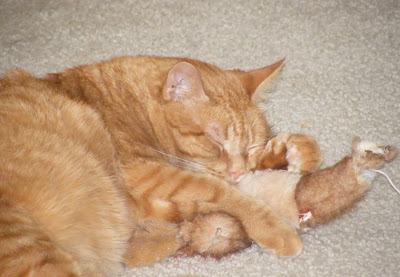 Foley: So anyway, we're at the thing, the babysitting, and the little one is stumbling around like Frankenstein, and she can't talk either, so she's going "et ta poppy, et ta poppy" and I don't know if she's saying get the puppy or eat the puppy, or eat the pooppy because with Pocket, you never know when she's going to drop a Vick bomb. 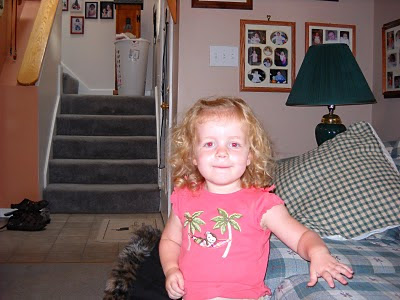 Pocket: I have no control over my body when I'm excited.

Foley: Yes, you and Charlie Sheen. And the other grand baby, she's slightly older, what she does is she runs up to Pocket, and she stamps her feet and yells as loud as she can.

Pocket: I think she gets that from her mother.

Foley: Meanwhile I'm being held by Daddy and I'm like Jerry Jones in the owner's box just watching all the action. Then you hid.

Pocket: Under the kitchen chair, where the wood that we're not supposed to chew on is.

Foley: Then they run out of the room and come back, and now they're on wheels. I mean who in their right mind would give them wheels? So now they're just flying around. And the little one, she's on this thing with Big Wheels. So we made it over to the couch and we were safe.

Foley: Yeah, not too big a fan of the leather couch.

Pocket: It make my genitals sweat.

Foley: OK Pocket, that's enough. And, get this, I got over my fear of the stairs. If you remember last time we babysat I fell down the stairs, and Regis had to host the show for a couple of weeks. Do you remember that?

Pocket: Talk about your excited pisser.

Foley: That's right. Anyway, this time, didn't fall down the stairs at all.

Pocket: That's because Daddy held you when Mommy put the grand babies to bed. You never even went up the stairs.

Foley: But I would have.

Pocket: If you had gone up the stairs you would have ended up looking like this. 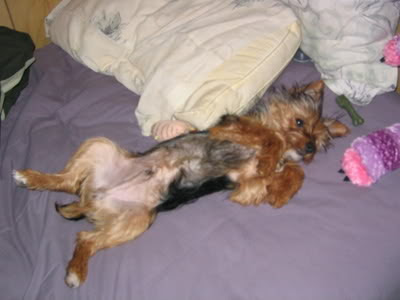 Pocket: Talk about your Hooters Open.

Foley: OK. Do we have time for the thing? We do. OK. From the home office, well we're at the home office, geeze, next time I'm showing up for rehearsal, so from here: Top Ten Reasons We Love Ladybug. OK are you ready?

#10: She classes up Hobo Hudson's neighborhood.
#9: Even when she's on a restricted diet her pooh tastes magnificent.
#8: She looks adversity in the face and says "Bo-la-la"
#7: She's well groomed
#6: She's the sweetest dog we know named after an insect
#5: Even when she's sick she always has a kind word for everyone
#4: Her bows
#3: Her wonderful parents who are letting her stay with us longer
#2: She's our friend even when we do dumb things
#1: She finally has given people something nice to see when they go to Florida.

Foley: OK. Our first guest is the nearly elected Republican Senator from our state Massachusetts, that's the seat you were running for wasn't it Pocket?

Pocket: That is correct Yorkie.

Foley: Well try to keep a civil fart in your butt. Now here is soon to be Senator Brown.

(Senator Brown walks out to applause.)

Foley: Welcome Senator, now, you're here with Pocket, one of your opponents, is there any bad blood between you?

Brown: No, no, Pocket ran a good clean campaign. She gave us quite a fright. I think if she was a little older, and house broken, I may have been in a great deal of trouble. At least more trouble than Martha Coakley.

Foley: Hah-hah-hah. She went on vacation and wouldn't go shake people's hands and ask for their vote, and spelled Massachusetts wrong in an ad, and ran the worst campaign since Barney Fife ran for Sheriff against Andy. What a silly girl. Hah-hah-hah. Oh. That's funny stuff.

Brown: We enjoy laughing about it at my house with my daughters, who are totally available, and doable. They're hot. One of them was on American Idol. Hot and available. My girls. On I Tunes.

Foley: Speaking of hot, what can you tell me about this picture. 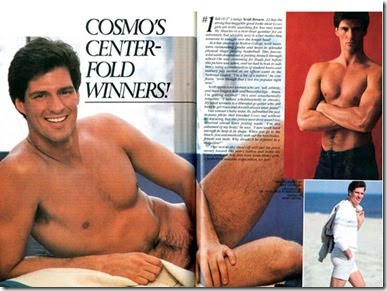 Brown: Oh, well, I was young, and, it was a kick, just something fun.

Foley: But it's gross, I mean you're all hairy. I don't let my Daddy come anywhere near me when he's like that. You either have your head covered in hair, or your entire body, these little spurts of growth you got going on there. Ugh.

Pocket: I'm pretty sure I saw you washing my friend Foxy last week. We have the picture here. 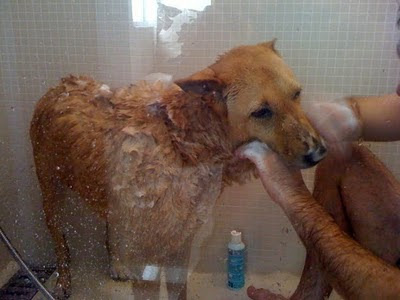 Brown: I have not had bathing relations with that animal.

Pocket: I think we have a scandal.

Foley: You have hairy legs, the mystery bather has hairy legs. I don't think it can be much clearer. You are the serial bather.

Brown: I'd like to get back to the issues.

Foley: So there you have it. Scott Brown secretly gets naked and washes dogs with his hairy body. Can impeachment be far behind? I would like to thank Cocoa and the Labradors and my sister Pocket, our guest dirty, hairy, naked dog washer Scott Brown. Thank you all and have a good night, now get away from me Senator Sicko.
Posted by Foley Monster, Pocket and River Song at 9:07 PM

Email ThisBlogThis!Share to TwitterShare to FacebookShare to Pinterest
Labels: The Pawnight Show