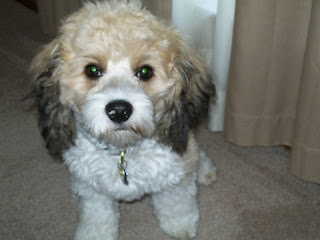 Does any pup keep track of our pups of the week.  I searched Wikipedia but there is no entry for the Tanner Brigade.  How is that possible?  I am curious because I don't remember naming sweet Shadow Pup of the Week.  How is it possible that we haven't named the nicest dog we know Pup of the Week?

This week Shadow got a double shot of devastating news.  But in typical Shadow fashion he began his log thinking of others and not himself.  With Shadow other pups always come first.

There is also a directness to Shadow that we appreciate.  In one sentence Shadow tells us the following:  His beloved Mom has the dreadful C word.  She found it when she noticed a spot on her skin.  They operated on her and the surgery was a success.  But her Mom had a reaction to the bandages and was in terrible pain.  He said this in about ten words.

Most of us would have spent four blogs on this.  It is a very much what puppies need.  To vent their worry and pain.  But polite, sweet Shadow uses a single sentence.  Such strength for such a little dog.

But there is more.  Not only his Shadow's Mommy sick but his Daddy as well.  If this was happening to me I would be under the bed and you would barely be able to see my tail.  But Shadow reports what happened with the aplomb of Anderson Cooper being attacked in Egypt.  But he wasn't being attacked by angry protesters but by bad news that struck straight to his heart.

His Daddy was having stomach issues and he had one of those med school cats do a scan on him and while they couldn't find out what was wrong with his tummy they found a spot on his lungs and we all know how bad that can be.  So both Shadow and his Mom have to be just trembling with fear.  We need to give them all our thoughts and prayers to help the Shadow family through this tough time.

Our poor Shadow, like Buddy Boy, has even had to spend a few days away from his Mom which is so hard when you know someone you love is sick.  What a difficult time for a sweet baby.

And still, at the end of his blog, he doesn't forget his friends, promising to keep us informed, and giving us puppy kisses.

We know your not a big dog Shadow, but your heart is about ten sizes larger than the largest dog, we love you, and you're our pup of the week.