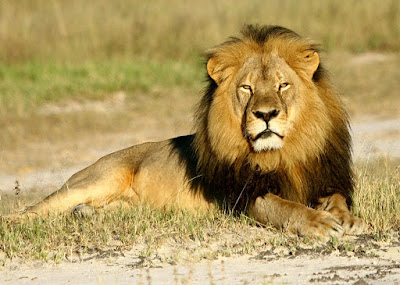 It was a bright, sunny afternoon when I got a special summons.  The only information I received was that a very loved animal would be crossing over the Bridge to the Immortal side.  I didn’t know what kind of pet it was, if it was a friend of mine or not, or if I knew the owner.

Word had spread quickly about our celebrated new angel and many animals gather around.  I peered over the edge of Enzo’s moving stairs and saw a shadow then heard a mighty roar.  Then I saw him.

He was a huge lion a million times larger than me!  I was going to warn my friends but they too had peered down Enzo’s stairs and saw the lion and they were already running for the hills.  I had the same instinct but I reminded myself that I was a judge who had a duty to swear in new anges and since I was already immortal the chances of being eaten were slim.  I looked down as the huge beast came closer to me.

Maybe being eaten wasn’t impossible.  It reached the top of Enzo’s stairs and put out a paw that was bigger than me  I slipped the good book under his paw and swore him in.  He then took that paw and put it to the side of my head.

I was afraid he would rip me open but he patted me.  “I left little ones behind, bigger than you, but still little ones.”  I did not want to offend the large man but I did have questions.

“Excuse me.” I said politely, “but we don’t get too many wild animals here.  We usually only get those who are loved by humans, or want to get loved by humans.”

He chuckled  “Oh I was loved,”  he said.  “I might have been loved more than any angel up here.”

Then he told me his story:  His name was Cecil.  He lived in the Hwange National Park in a place called Zimbabwe.  It was a sanctuary where he could live in peace.  There was only one animal who could have harmed him and that animal was the dreaded human.  One of them, who fancied himself a hunter, decided that Cecil’s beautiful head would like fine on the wall of his dental clinic.  He tied a carcass of another dead animal to his jeep, lead Cecil off the Park, wounded him with a bow and arrow, and then, after hours of Cecil’s suffering, killed him with a gun and sawed off his head.

It was one of the most horrible passings I had ever heard.  I wanted to start cursing at Cecil’s murderer and send my birds to poop on his head but I was afraid I would be labeled an anti-dentite.  Cecil sensed my anger and told me that there were humans who wanted to see the dentist prosecuted for murdering Cecil.  I asked him how he could trust the humans and he said that the humans had provided him with a safe home and were now taking care of his cubs.  And he had no problems with hunters.  He had sent plenty of animals to the Bridge to feed his family so he could not judge hunters.  But is was the irresponsible hunters, the ones who don’t follow the roles who cause all the damage.

I told him that his passing was the most senseless I had ever encountered.  He quickly corrected me.

“My passing has let many people know about the lions and the sanctuary.  People are discussing the need for lions to be protected and they are outraged at my murder.  Most death is senseless but mine has meant something.  Hopefully mine will make the world a safer place for lions.”

I thought he made a lot of sense.  Many of us live lives of great meaning, but to have a death have great meaning too is a wonderful legacy.  Also I didn’t want to argue with a lion.

He told me he was going high up in the mountains where the rest of the lions roam.  I told him he was welcome to visit us little animals whenever he wanted to do so.  He only had one request.  He had fallen behind watching Zoo and wanted to know if there was somewhere he could catch up with the episodes.  I pointed him to Tommy Tunes’ house where everybody is welcome.

Later that day I checked Tommy’s house and Cecil was lying on the floor covered with pups and cats snuggling with him.

I was sure Cecil would visit again..

Posted by Foley Monster, Pocket and River Song at 11:41 PM