Pup of the Week: Building a Wall for Paco, Josie, Smoochy, Macdougal, and Junior

April 10, 2016
My good friend Ladybug and I have been working on a secret project.  Each morning we begin construction on a great, big beautiful wall.  And each evening after we go to sleep The Big Guy knocks it down with a giant wrecking ball.
But we are still building the wall.  Why you ask.  We are building the wall to keep out the unwanted:  All dogs on the mortal side: Especially our dear friends.
We build the wall for Paco.

He has serious breathing issues.  His Mom is afraid to go to work.  Every time she leaves Paco she wonders if he will need medicine after he has an attack and she will not be there to administer the drugs.  And she is afraid of the day the medicine won’t work.   We want Paco to have a lot more days with his Mom on the mortal side. So we build the wall for Paco.
We build the wall for Josie.

She had two terrible attacks from an undiagnosed infection.  She spent many nights at the doctors.  Finally, after an array of tests, a tumor was detected.  It had perforated her colon causing the attacks.  In a way, the perforated colon was a blessing.  If that had not happened, the tumor would have remained undetected.  Josie had the tumor removed.  They are awaiting the results of the biopsy.  She may still have to undergo chemo.  So we build the wall for Josie.
We build the wall for Smoochy.

He escaped a sure trip to the Bridge in March.  But his bone cancer had turned him into a tri-paw.  His happy gallop is now a slow limp.  But Smoochy is determined to stay with his Mom as long as he can.  To help him we build the wall for Smoochy.

We build the wall for MacDougal.

He has been suffering from vomiting, back issues, mobility issues and to top it off a tumor on his bottom.   He has endured every test known in the medical world.  He has been shaved, poked, prodded, and ­probed.  Among his diagnosis have been cancer, gall bladder blockage, and other diagnoses which the doctor dismissed as quickly as they diagnosed them.  Now the doctors have settled on acid reflux.  The doctors could not decide if the tumor on his butt was cancerous and wanted to be more tests but after a month of Mac undergoing a myriad of tests his Mom decided no more tests and is concentrating on giving Mac the best days possible until it is his time.  To ensure it is not his time we build the wall for MacDougal.
We build the wall for Junior Johnson. 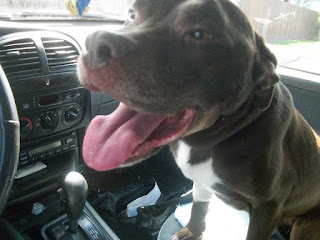 The doctors diagnosed Junior with lymphoma.  His Mom is hoping it is a bad diagnosis.  Junior has undergone an operation to remove the tumor, and his Mom is waiting to hear from the vet about the next step.  She is very worried about her special boy.  So we build the wall for Junior.

We build the wall for every sick dog, every senior dog, every dog living heartbeat to heartbeat.  We know the Big Guy will keep knocking down our wall, but we will never stop building it to try to ke­­­ep dogs and parents together for many more days.

Break is over.  Time to rebuild the wall.