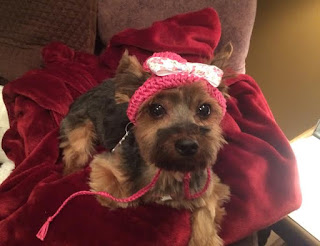 Oh, my.  Snowy spring Mondays foretells ill fortune
.
Monday began peacefully enough.  The bedroom was cold, the bed warm, and the four of us had nowhere to go.  River and I were looking forward to a snuggly day spent under blankets on mom’s lap.  We finally arose and had to do our business in ankles deep snow.  Our most private areas were chilled.  We hurried back inside hoping for second bed but alas Mommy had started to “make” the bed.  Once they make the bed, we can’t sleep in it.  I prefer to think of it as “breaking the bed."

The trouble began during breakfast.  Daddy sipped his milk then a curious expression appeared on his face.  He said the milk was warm.  Mommy checked the refrigerator, and the temperature gauge pointed towards spoilage.  Our old refrigerator is going to Appliance Bridge.  Mommy announced, sadly, that the old fridge was not long for the kitchen.

Daddy dropped some ice cubes into his milk, and they commenced eating.  I sniffed something.  River’s nose was in the air, and I could tell she smelled it too.  “Don’t say anything,” River warned.  “When something smells we are usually blamed.”

Mommy thought since the refrigerator was malfunctioning, that it must be the source of the smell.  But it wasn’t.  I knew it was coming from the laundry room, but River counseled me to stay still.  My parents soon figured the origin of the scent. The motor in the washing machine had made a suicide pact with the refrigerator and was headed to Appliance Bridge as well.

Now Mommy and Daddy would be going out, and our snuggled was ruined.  Even worse they were going out in the snow which is super dangerous.  But before they went we had to go out in the snow again and dip our privates into the frozen zone.

It seemed like they were gone forever.  River and I waited:  Impatiently and nervously.  When they returned home, they had a big red cooler.  Their appliances would not be delivered for ten days.  And then we were back out in the cold and snow with our privates.

Then we almost answered the question we had wondered about for so long.  How many of our parents do you need to change a lightbulb?  Thanks to a special bulb and track lighting the answer is more than two, and a pair of parents was all we had.  Part of the fixture that holds the globe covering the light broke in Dad’s hand.  So they have to order a part of that.

Then six of the most depressing words in the English language was spoken:  “Opening Day canceled because of snow.”

It all began when my parents “broke” the bed.