The Failed Experiment by River Song 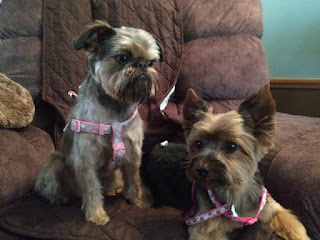 My parents are under the mistaken belief that I am stressed out.  The final straw occurred when my parents found blood droplets outside my crate.  They think I cut my gums chewing the bars.  I refuse to respond to these allegations because my mouth hurts.
My parents decided I needed something to calm down.  Mommy went to the Amazon to look for a highly rated pet anxiety treatment.  She found a treatment called “Pet Relief.”  Mommy liked it because it was a liquid that she could rub on my tummy.  She ordered us a bottle.
A few days later a big package arrived from the Amazon.  Daddy sliced the package open.  He pulled out several connected, inflated bubbles, some paper, and a teeny tiny bottle.  Make a note:  If you order something from the Amazon, and the first thing that pops into my mind is a monkey, it is going to come in a gigantic box.
That night daddy opened the bottle.  It smelled lovely.  He poured some on his hands and then, per the directions, he began to rub it on my face.
Let me pause in this narrative to note that we never do reviews of any kind on this blog.  I have received permission from Foley to do our first product review.
The Product:  Pet Relief
The Review:  It’s crap.
The Description:  The oily, smelly goop, once applied, caused my hair to stand straight up, and my eyes to water.  I saw, through teary eyes, Pocket have her hair styled too.  I witnessed Pocket having a similar reaction to mine.  I ran over to the mat by the door and began rubbing my head on the mat.  I rubbed so hard I ended up with my butt in the air.
“River, come here!” I heard my dear sister bark.  “You can get this crap off your head if you rub it on Mommy’s couch.”
A capitol idea.  I jumped up on the couch and we both rubbed our oily heads all over Mommy’s couch.  Her first instinct was to tell us to get down but then she realized she could steam clean the couch easier than steam cleaning our heads.
Then Pocket and I got on the floor and began to chase each other around the house.  Not quite what my mom hoped for when she bought anti-anxiety medication.
Mom checked the paperwork that came with the medication.  It stated if you a positive review on the Amazon you would get half off your next shipment.  I guess that explains the reviews.  We won’t be leaving a good one.  In fact, we will be leaving a quite bad review.
Now I am worried my parents are putting Rescue Remedy in my food.  Clever, clever, humans.
Please message me immediately if I look any less grumpy.
Posted by Foley Monster, Pocket and River Song at 9:34 PM