Tails From Rainbow Bridge: Foley and the Catch 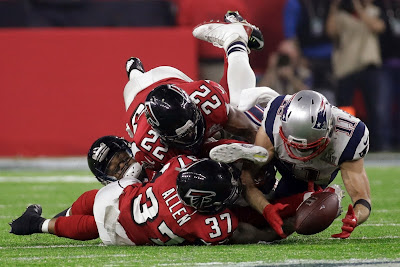 It is possible that I may have, completely inadvertently, and innocently, interfered at the Super Bowl.

It started with a summons from the Big Guy.  Usually, when I am asked to fly up to the summit of the highest mountain, I am going to be admonished.  But instead of punishment, I was given an order.

The Big Guy considers Lady Gaga a treasure.  He was very concerned about her halftime show.  First, he thought the drones would malfunction and ruin the show.  He asked me to get some of my Angel friends together to light up the nighttime sky behind Gaga.

I had Scooby design dozens of glow in the dark wings for my angel friends so we could be seen behind her while she sang from the roof.  Then I got a second summons.  “I am worried, Lady Gaga is going to leap from the roof, and I can’t have her hurt,” an adoring Big Guy said.

“Leap from the roof?” I asked.  “Back in my day, the USC marching band would perform at halftime.  They would play popular songs and spell out words on the field.  And we were glad!  Glad I say.”

He ignored me.  “Make sure you have some large Angels near her to guide her on her fall.”

This was a lot of responsibility for one small dog.  I and several other small dogs like Sydney, Chelsea, Paco, Whitley, Linky, Simon, Max and much more flew down from the skies at halftime and, following my careful choreography, made the beginning of her show spectacular.

Then it was time for her plunge.  I took her right arm and Falcon fan Cassie, knowing that, at that point, most Patriots fans would have been happier seeing Gaga free fall and splat on the ground to get the game postponed and restarted at a later date, took her left arm, and we eased Gaga to the stage.  We Angels congratulated ourselves at the end of the performance by forming a giant Pepsi symbol.

We turned off our wings and watched the game from inside the roof.  With a few minutes left I got tired and lost my grip.  I fell all the way to the turf just as Tom Brady threw the ball to Julian Edelman in triple coverage.  The ball bounced off an Atlanta player, then over several hands and ankles until it landed on top of me.  No one could see me but the ball was balancing on my back where Mr. Edelman grasped the ball and held onto it for a completed pass.  I quickly flew up from the scrum and told the Angels we needed to leave before we got caught.  We went through a small hole in the roof and back to Rainbow Bridge.  Even though I swear it was inadvertent Cassie has barely spoken to me all week.


Just remember, it was not divine intervention that gave the Patriots their fifth Super Bowl victory, it was a Yorkie Interception.