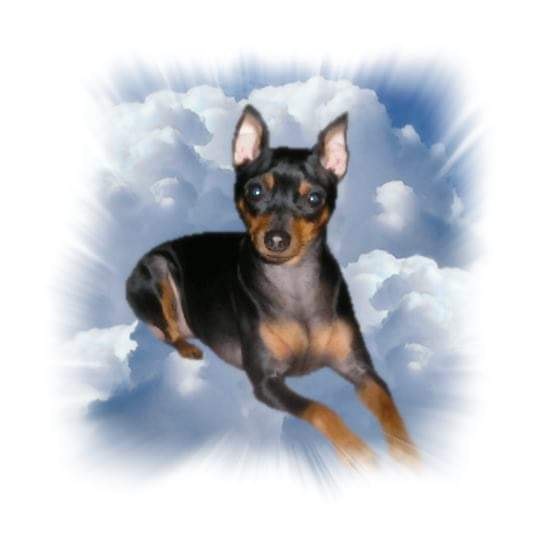 The young always believe they are invincible.  We dogs are no different. When we joined social media more than ten years ago, we invented terms that have become part of our vernacular and created the way we communicate with one another online.  We were in the prime of our lives. The moment our heartbeats expired seemed off in the seldom thought about distance.

Then one day we take ill.  All our youth and vitality are stripped away. Our parents and the vet begin to have a hushed conversation about us.  Suddenly our heartbeats start to expire. It happens in the blink of an eye.

I remember when we thought the Min Pin gang was invincible.  Four beautiful little dogs, Tennie, Mouse, Scooter, and Rabbitt, who happily lived with their parents.  But one night, the lions came. Their parents split up as did the gang. Tennie and Rabbit went to their dad and Scooter and Rabbit.

Sometimes during divorces, humans take things because they want them, and other times they take things because they don't want the other person to have them. I don't know what the Min Pin's Dad's motivation was when he took half the pack, but when he surrendered Tennie back to her mom, she was gravely ill, and we couldn't help but think it was the latter.

Rabbit went to the Bridge under his dad's care, and Teenie was malnourished, sick, and had diarrhea.  Her dad offered to help her mom with any treatments or expenses, and then he took a little walk out of Teenie's life forever.  It would take a lot of tests and even more money to determine what was wrong with Teenie and if she could be helped. But mama Paula is a dog mom, and when their babies are sick, time and money mean nothing.

Teenie was diagnosed with IBD/PLE and hypoalbuminemia.  Her mom finally found a food she could tolerate, and slowly nursed her baby back to health.  Teenie had to take medicine every day, and her mom nearly went broke paying for it, but she didn't mind, her babies always came first.
Two years later, brave Teenie encountered an illness that neither she or her mom could defeat.  She was diagnosed with liver cancer. The malignant tumor was removed at the beginning of February, and Teenie seemed to be recovering, but on March 4, her tiny body gave out.  She wouldn't eat and had explosive diarrhea. Her mom and her vet tried everything, but Teenie kept getting worse. Her mom knew Teenie was suffering and sent her baby to the Bridge, then took all Teenie's pain on herself and found herself on the dark road of grief once again.

Teenie ran across the Bridge and joined Rabbit and Scooter in a game of pinscher chase and play.  The trio was thrilled to be together, and they got to work trying to reach their mom's dreams and to visit Mouse, the surviving member of the min-pin gang.

That night the min-pin gang got together with me, Tommy Tunes, Hattie Mae, and other Doggyspace friends, and we talked about when we were all young and had our futures ahead of us.

And then we realized we still had our futures ahead of us.  We were now immortal. When our parents sent us to the Bridge, they made us forever young, and that's an excellent gift.

We all visited our parents in their dreams that night to give our parents a kiss of thanks.