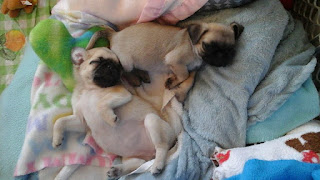 Poor Tweedles barely has had a day’s rest since she arrived at the Bridge because of how her parents’ were suffering.  The pain that a soul feels when a loved one goes to the immortal side is equal to the amount of love the survivor held in their hearts for the one they lost.  For Tweedles’ parents, that was nearly their whole hearts.  For weeks after her passing, they existed like zombies with nothing living inside.

Tweedles visited her parents in their dreams, then as various winged creatures, and even as a ghost, but she could not break through her parents’ grief.  It didn’t seem that anything would work, except one.  She needed to find her parents, another dog who could start repairing their hearts.

She interviewed hundreds of pups, some of them were in shelters, others waiting to be born.  Occasionally I would help her and point out dogs that I was sure her parents would love, but Tweedles had very specific traits she needed to see in her replacement, and no dog was meeting them, not even by half.

I don’t like to tell another dog how they should be searching for their successor, but I did think Tweedles was too strict.  None of us can find the perfect dog to replace us; we all have to settle for close enough and hope, with our guidance, the dogs will improve after they join our pack.  But Tweedles would accept nothing less than the absolute perfect dog.  I told her it sounded like she needed a pup who was twice as good as the candidates she had interviewed.

A look of realization came over Tweedle's face.  “That’s perfect!” she yelled.  She ran out of the house.  Honestly, I had no idea what she meant.

But, I soon found out.  I saw Tweedles interviewing pairs of dogs.  I agreed, two dogs might be able to rebuild her parents’ hearts, but it was hard enough to get our humans to find the single dog we chose for them, getting them to pick the right two would be impossible.

Tweedles was confident.  She had a unique connection with her parents.  It was hard for him to give them comfort after she came to the Bridge because the wall of grief caused by her passing was too strong, but now she would be approaching them with a new tactic, with two new partners to triple-team the pain.

She found the perfect duo in pre-born classes.  Like her, they were pugs, and almost as adorable as she was.  They are named Mooki and Biddie.  They were filled with love, snuggles, devotion, and cuteness.  It was the perfect recipe to help slay the grief monster.

It took a lot of dream persuading with both her parents to get them to open their house to two trouble-making baby pugs but, after nights of dream visits, she wore down their reserves. Even if they didn’t realize they would do so, one morning, they uttered the same thought; it was time to open their house to a new baby, a double in fact.

Many people would think that people her parents’ age would be crazy to take in two puppies, and the duo, have certainly kept their parents busy, by crawling into every crevice, having boundless energy, and creating the two things that conquer grief every time:  Love and staying active.

Tweedles is delighted when she watches her two chargers with her parents.  The grief they had carried for so long was easing in her heart too.  Like all dogs, she feels what her parents are feeling, and the sadness is turning to joy.

Finally, Tweedles is happy at the Bridge, and she can rest, knowing the long projet of starting to rebuild her parent’s hearts is over.

She had found two great carpenters in Mooki and Biddi.