From the desk of Foley Monster: River's Attempt to Rid the World of Squirrels Causes Her to Believe the Wrong Person 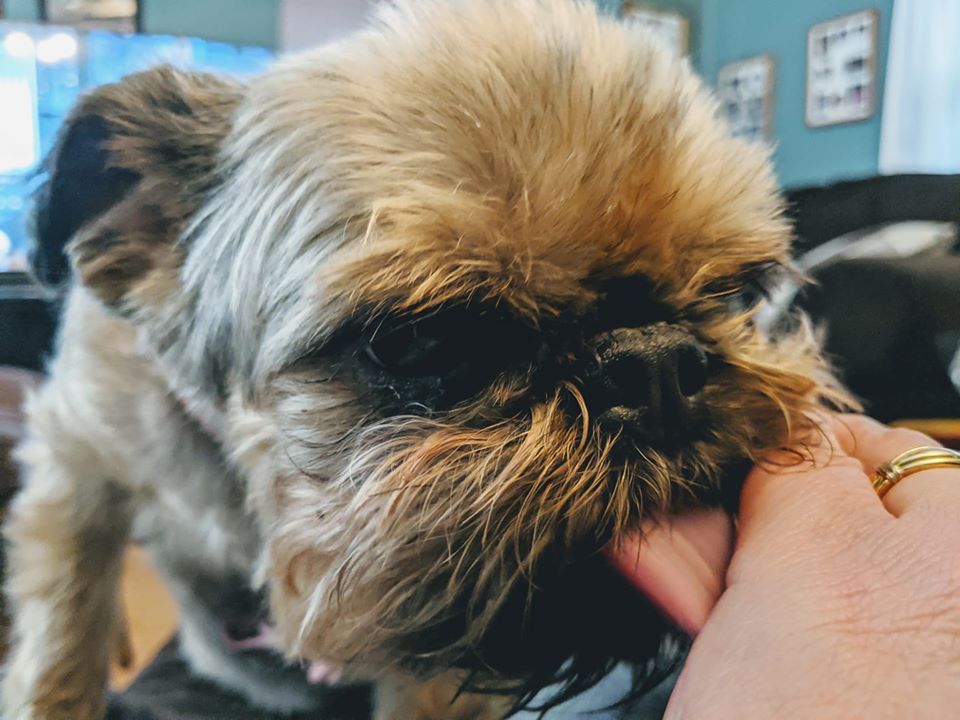 River Song had enough.  Every morning she patrolled the yard and found the grass-covered in critter markings.  Neither she nor Pocket could drink enough water to cover the spots with their pee.  To rid her yard from the persistent pests, River needed a professional.

She searched Cujo's list on the Internet and saw a listing for Mr. Boone, who promised that only he could keep critters from sneaking into her yard.   River was sure this was the solution, but Pocket was skeptical.  Mr. Boone's Facebook page listed his occupation as a rainmaker, psychic, and snake oil salesman. Pocket cautioned River about Mr. Boone's credentials, but River had been bothered by critters for so long her desire to believe in a savior triumphed over her common sense.

Mr. Boone arrived the next day. He assured my sisters he knew more about vermin than anyone else, and only he could fix the problem.   He told them to go to sleep, and when they woke up, he would have solved all their problems.  Best of all, Mr. Boone promised he would not charge them a dime.  "All I want is a positive Yelp review."  What could be better?

Pocket and River did as instructed, and when they awoke, the house had a 10-foot wall with no gate surrounding it.  River ran outside and saw Mr. Boone standing on top of the wall.  "What have you done?". River cried.

"I built you a wall so the critters can't get in," Boone said triumphantly.   "Here's your bill.” Mr. Boone handed it to River.  "I thought you said there'd been no charge," she said.

"Not for me but the supplies," he explained.

“'it's my brother's company—no connection to me. I used to own it.  My son runs it. You can make the check out to me.”  When Pocket saw a squirrel climbing over the wall, Mr. Boone said:  “That’s not a squirrel; I didn’t build that part of the wall, it’s just a furry duck.”

River knew her parents, who were shopping, would not be able to get to the house because of the wall, and even if they could, they would not be happy being surrounded by cement. Mr. Boone told River he would knock down the impediment and use another method to keep the squirrels out.  He told my sisters to go inside and relax.

They went back to sleep, and when they woke up, they smelled something most foul coming from the lawn.  When they went outside, they saw Mr. Boone on the grass, smiling broadly.  “I have covered your lawn with wolf pee,” he said.  It was horrible.  The girls couldn’t even get close to the grass without wanting to throw up.  “No squirrel will come on this lawn now,” Mr. Boone announced.

“No one else will either,” River said.  She looked down on the lawn.  “It’s killing the grass!” she barked.  “You have to get this smell off the lawn before my parents come home.”.  Mr. Boone agreed but gave River a bill for “Mr. Boone’s Big House of Large Wolves with Small Bladders.”  Mr. Boone claimed he was owed 120 pounds of kibble.  Frustrated, River told Mr. Boone she hoped he had better results with his next attempt.  He swore to River it would.

A half-hour later, River went back outside.  The smell and the wall were gone.  Mr. Boone stood in the middle of the lawn, smiling broadly.  “I have removed all the squirrels from the yard!” he announced.  “I want you to tell your friends if they need a vermin free yard to contact Mr. Boone.”

“There’s a squirrel on the lawn,” Pocket said, pointing to one.

“Yes, there is,” Pocket insisted.

“How about the chipmunk near the garden?” River pointed out.

“It’s not there.  The chipmunks are all gone.  You are chipmunk free.”

Boone denied more vermin sighting.  An angry River insisted that Boone do something.  “I could give you all COVID-19,” he said.  “Then, no one will come in the yard.”

Determining that she did not want to send good kibble after bad, River gave in and told Mr. Boone she would send him payments, seriously curbing her food intake, which reminded him to produce a third bill, for Magic Vermin Repellent from Mr. Boone’s store. Finally, he packed everything into his bright orange truck and disappeared around the bend.

I do not blame River.  She was upset, wanted change, and believed someone too good to be true.  I don’t think she was the first one.  Hopefully, she is the last.

Posted by Foley Monster, Pocket and River Song at 8:09 PM