Ward is Made Whole at the Bridge 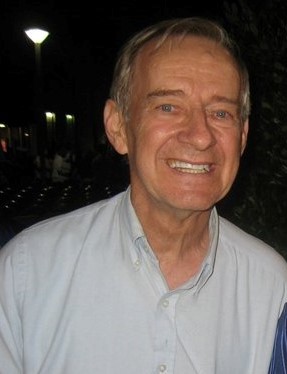 People say we are here for an eternity.  When we are waiting for our parents, it certainly seems that long.  It is rare for people to pass before their dogs do.  That is why so few are waiting for us when we cross the Bridge.  When a human passes over, it is damn pcrowded in the waiting area.  If the person had been lucky and lived a good life, they end up with more loved ones on the immortal side than the living.  Ward Lawson lived a long and blessed life.  There were hundreds of souls waiting for him as he crossed.  But, there was one more—his shadow.

Ward spent his last years living with dementia. Every day for years, he got a degree worse until his wife, the remarkable Delores, could no longer care for him.   She made the difficult decision to place Ward in a nursing home.  It was the correct choice because a few weeks after being placed, Ward lost the ability to care for himself in every way, and needed around the clock nursing and attention.  Delores still went to the home every day to sit with a man who no longer recognized her.  There are many living hells on this earth, and that is one of the worst ones.

When the pandemic shattered our lives, nursing homes shut down as they became the trailer park to the virus’ tornado.  Dee couldn’t visit Ward for months.  She was recently allowed to see him outside.  The dementia was like taking an original and making a copy, then making another copy of the last one for years, until what is left seems nothing like the original.  That is how Ward looked, hundreds of copies removed from himself.  When the nursing home called Saturday to say Ward’s song was ending, the family arrived to say goodbye.  He did not leave, never one to be the center of attention, until he was alone.  Sometimes passing over is a private affair.

When we saw Ward starting to cross the Bridge, his shadow walked towards him, and they merged in the middle, and Ward became whole again. I wish Dee could have seen him then, walking confidently like he had when he was younger, remembering and recognizing everything.  His years of torment were over.  AJ, Sabrina, and the other dogs that Ward loved during his life waited for the human loved ones to greet Ward.  When they finished, Ward got on his knees, and the dogs jumped on him, licked his face, with wagged their tails.  No Bridge crossing is a happy occasion because there are loved ones left behind, but this was close.

Seeing Ward at the Bridge is a beautiful experience.   We are very happy for AJ, Sabrina, and the other dogs who have patiently waited for their dad to return, some of them for decades.  It is both what we hope for the most and dread.  Sadly, the people who left behind on Earth can’t see him.

Ward gave everything he had to the people he left behind.  He lived like the Giving Tree, and, like that story, he ended life as a stump, not the evergreen he once was and is now after crossing the Bridge.

A soul’s passing is always sad, but sometimes just for the people left behind.  As, in this case, they can be very joyful.

Posted by Foley Monster, Pocket and River Song at 8:57 PM