How, in Less Than A Day, Aran and Frank Changed Rainbow Bridge Forever 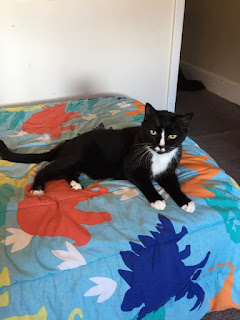 I don’t know why we have different places for dogs and cats at the Bridge since so many of us happily co-existed on the mortal side.  These rules were written long ago, and none of us have ever had the motivation to change them.

But then Frank the cat departed his loving family for the Bridge and challenged the rules like no soul had ever done before.

Frank, like all cats, emerged from the River of Life, shook off the water, and began to cross the Bridge into Kitty Land when he saw hundreds of his species waiting for him. But the one he most wanted to see was not there, so he stopped crossing ran down the bank until he came to the Doggie Space Bridge, which he began to walk over.

He made it halfway across when he was stopped by Morris, the most potent and persnickety feline judge at the Bridge.  Morris commanded Frank to turn and cross in their territory. Being a perfect cat specimen Frank performed the most predictable kitty maneuver. He sat in the middle of the expanse and refused to budge.

Aran saw his brother being confronted by the large tabby and ran down the steps towards the Bridge, snarling like he had seen a rogue squirrel. I ran after him hoping to avoid an international incident.

Morris and I, being judges, are allowed to cross the Bridge to the edge of the other side, but angels like Aran can’t even step foot on it, or they could be banished like Moonlight Graham.  I made sure Aran did not make the mistake of going on the Bridge then walked to the middle where Frank was confronting the cat judge. I said that there was no reason Frank could not cross to Doggyspace. Morris began to recite in dizzying fashion a list of regulations stating why he couldn’t. It started to become a real brouhaha when Aron suggested a crossing point between two sections where cats and dogs can wait, be sworn in, and cohabitate together, unlike the ongoing cases of dogs and cats shacking up illegally, a rule only fat cats like Morris and enforced.

Of course, Maurice had a conniption at the mere suggestion of a duel crossing bridge, but I thought it was a great idea. Frank went back to the other side, where none of us could go. We had to move quickly. If Frank didn’t cross over by sundown, he would be sentenced to live as a ghost, not of either world.

We got Aran’s friends to chip in and help build the Bridge while the kitties living illegally with us recruited other cats to help. Frank was the only one building on his side, but he had such determination he was outpacing us before sundown; we made the two sides of the new Bridge meet, and Frank was the first to cross over. Everyone celebrated except for Morris, who sat in the window licking his paw.

Aran and Frank built their home on the new land between the dogs and cats’ villages. They called it Pet Space, where all animals can cohabitate. Aran proudly said they would even allow ferrets. Frank told him not to get carried away.

I hope Mama Lynn finds out that her two angels changed the Bridge for the better just as they did her world.  She‘s responsible for raising two trailblazing pets who created a land where dogs and cats could live openly together. The Space is already filling up, and thanks to Frank and Aran, we greet a new day of love and understanding.

Posted by Foley Monster, Pocket and River Song at 4:00 PM