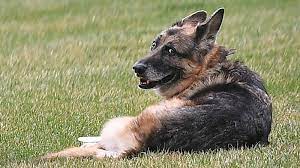 I told the angels to line up and look dignified, an important pup, Champ, the country’s first dog, was crossing the Bridge, and I wanted to make sure we gave him the arrival he deserved.

I don’t think a dog partnered with a successful person is more valuable than one whose companion is homeless.  The latter probably gets more attention than a President’s dog, who receives significantly less snuggle time when they move into 1600 Pennsylvania Avenue. Still, no person has more responsibility than the President, and, like all humans, they rely on their dogs for advice, which made Champ great and worthy of our respect.

`    I must admit, we were expecting a grand spectacle when Champ crossed the Bridge, but in his 13 years, two-thirds of them were spent on a farm in Delaware; he lived a quiet and unassuming life of anonymity.

When he arrived, we barely noticed the humble dog crossing the bridge and climbing the stairs.  Suddenly, we recognized Champ and showered him with applause.  He quieted us, then talked about his fascinating life.

After his first few years, shuttling between the farm and Washington, Champ settled into life as a simple life of a dog living with two retired people.  Then his dad got a big job back in the crazy city, and he, and his brother Major, went from the farm to a home with people scurrying everywhere who caused stress.  Champ had experienced life in the capital when he was a young dog. Although he didn’t like it, he accepted the circumstances of his new situation. Still, Major, a rescue who only knew the peaceful life, reacted poorly, nipped several people, and suddenly became fodder for public discussion.  It was not the life either dog wanted, but they loved their parents, so they tried to adjust.

Champ, at 13, a grand age for a Shephard, was slowing down and faced illnesses no dog could bear, but he fought to stay with his dad because he had become the President’s most trusted counsel.  But, as was proved during his dad’s trip to Europe, Champ could not go everywhere with him.  There was only one way for him to advise his dad constantly, through dream visits.  That is why Champ decided to go to the Bridge.  It would be better for the country.

But, Champ was worried about his brother.  He had come from an abusive situation, and the insanity of daily life in Washington was too much for the dog’s fragile psyche.  He would have to spend a lot of time in Champ’s dreams, but, unlike their dad, the young pup moved quickly, relying on instinct and not reason, which makes keeping him out of trouble, off the news, and being a cable news talking point, difficult.  Major hopes Champ adjusts to being a White House dog because his dad needs him, but that life isn’t for every dog.

Major is confident he can communicate to and correctly advise his dad because, as a person ages, the wall between the conscious and sub-conscious weakens and makes them more susceptible to strange, disembodied voices that speak in the dark.  When that wall collapses, they call it Alzheimer’s.

We didn’t have the chance to speak with Champ for long.  Bo brought him to the stately land high in the mountains where Presidential dogs live with their parents and work to influence the nation’s top officeholder.  On his first day, Champ met with Fala, and his dad FDR, Fido, and Abraham Lincon, as well as Sweet Lips and George Washington, who told Major to advise his dad that, if there is a troublesome Fox in the hen house, put it down quickly before it causes problems with the flock.

At least, thanks to Champ’s sacrifice, the President will have history’s greatest minds to help, with his loyal dog as the conduit.  Hopefully, he won’t ignore those mysterious night visits.  The whole mortal world will be better off if he listens.

Posted by Foley Monster, Pocket and River Song at 9:14 PM