For Foley' Sisters: Visitors At Last 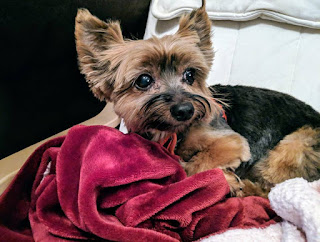 Last night, a very excited River dreamed of me so we could talk.  “You won’t believe what happened!” she yelled, bursting into my cottage and tracking in dream mud.  When I asked what, she informed me that she and Pocket had finally had visitors after more than a year.

At first, we dogs thought the pandemic was awesome.  Our parents were home all the time, and the shelters were being cleared out.  But then parents started to get extremely sick, and some went to the Bridge.  We had to go into the vets and groomers alone.  This pandemic was not going to be as pleasurable as we thought.

My parents, as is true with all dog lovers, don’t like people.  There are only a few they allow to cross their threshold.  The most frequent visitors are Mommy’s brother and his wife and her daughter and granddaughter.  While the pandemic was raging, the daughter and grandaughter visits were limited.  Mommy’s brother did not visit at all.  For two dogs like my sisters, who thrive on smells and attention, it was a long, dark year.

When you are home with just your parents, the routine of life becomes absolute.  You know what day it is when the groceries are done, when the linen is changed, when the bathrooms are scrubbed, when the parents get take out, and when soup day is.  In our house, the soup is made on Friday.

On Friday, for the first time in 14 months, there was no soup made on Friday.  At first, my sisters wondered if they had slept through Friday, and it was Saturday, but that was foolish.  River would never sleep through dinner.  Then the dog dinner dishes were brought out, and supper for my sister was prepared.

Pocket was smart enough to know something was happening.  It was either awful:  our parents going out, or exceptionally good:  someone coming over.  She couldn’t discuss this with River, who was, as always, obsessed with food.

Then Daddy arrived with five pizza boxes, which is a lot, even for the pizzaholics I lived with.  That is when the girls realized the long guest embargo was over.  Of course, that made my two undisciplined sisters want to pee, and while they were out, the guests entered without the pleasure of two crazy dogs sniffing them like they are old cheese in the back of the refrigerator.

River and Pocket were four houses down the street when they witnessed the guests’ arrival.  They pulled Daddy back to the house like he was a Trump brother dragging an endangered species for a photo-op.  The guests were already seated, but that did not prevent lots of sniffing and licking.  It worked out better for the pups since they are small dogs, and this is the closest to the guests’ butt they would get.

They ran around barking and sniffing.  They jumped up with their paws on the guests’ legs.  They barked in joy.  They did the spin around, and then, after five minutes, they lay down and were hoping these two people went away so they could get a lap.

Dogs love the beginning and end of visits; the middle is long and tedious.

Now the pandemic is close to being over, and lots of people with strange smells will be allowed back into the house.

This is one of the rare times I envy my sisters.

Posted by Foley Monster, Pocket and River Song at 7:42 PM