Foley's Tails From Rainbow Bridge: Toby Reunites with his Mom to Help her at the Bridge 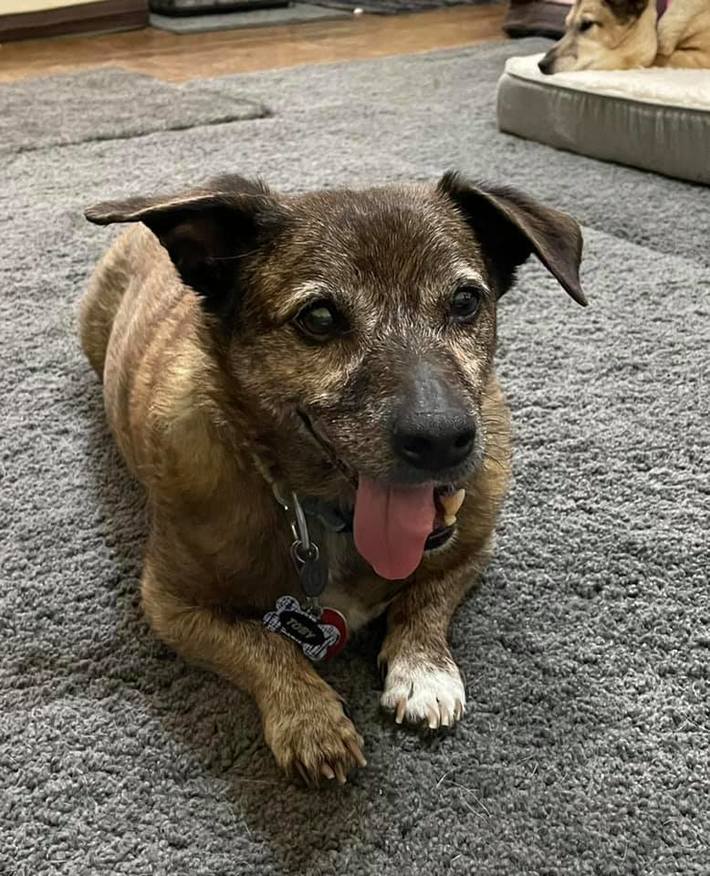 When the guardian angel for rescue dogs Aunt Laura, was summoned to the Bridge to help homeless pups find homes, our dear friends, Toby, Maggie, and Pokey, went to live on the other side of the country with their surrogate skin sister, Kate. The three of them were thrilled that they were still in the (Doggyspace) family, but they had decided, when their mom passed, that, in short order, one of them would follow her into the dark.

The logical choice was Pokey, the oldest and the one with the most health issues. He was his mom's heart dog. Pokey knew his going to the Bridge would be detrimental to his mom’s fragile health. He begged for and borrowed heartbeats. When it was time for one of them to join their mom, Pokey had too many to pass over. Sadly, he got the majority from his brother Toby.

That was when the pack’s youngest brother decided to end his mortal existence and aid Momma Laura at the Bridge. His only regret was leaving Sister Kate after such a short time with her.  The Lunn Pack was grateful to her for giving them all such a lovely family after their first one was shattered. They knew she had lost her own heart dog when Shiloh went to the Bridge, and they did not want to hurt the sweet sister who gave them a home.

It was Shiloh, who visited Toby’s dreams, and convinced him that his mom could handle his passing  Toby thought it was cruel to leave her after a short time, and Shiloh reminded him the awful thing would have been never to live with Sister Kate and not experiencing the privilege of being her dog.

One day this month, a seemingly healthy Toby developed breathing problems, an issue that stumped more than one vet because his lungs were clear, and he had no visible underlying symptoms. What they could not see was a combination of lent heartbeats and the willingness of a stubborn pup to leave his mortal coil and be with his mom. He passed over on the vet’s table at his sister Kate’s work.

While we angels were well aware of Toby’s desire to join us, we underestimated his ambition. We were surprised when he arrived so soon after making his decision. Standing at the edge of Hobo’s Landing, looking down at Toby as he climbed the steps towards us, was Angel Laura waging an inner battle to either be angry he had thrown his mortal life away or happy to see her boy again.

Toby had been in trouble a lot when he lived with Angel Laura, but he knew a single sweet look could get him out of it. When Laura saw that winning expression again, her anger melted; she dropped to her knees and almost hugged the stuffing out of him.

When they relinquished one another, Laura told him he did not have to come to the Bridge because she was okay.   Toby answered that he could tell during their dream visits how much she missed her kids. Passing over to be with her was not a sacrifice. It was a privilege.

That very first night, they visited sister Kate in her dreams so Toby could thank her for saving the family and apologize for any heartache he may have caused.  Angel Laura said that Kate probably wouldn’t remember the dream but still feel relieved when she awoke.

Even a dog rescue Angel like Laura wants things a certain way, and Toby explained what they are to the hundreds of angels who were homeless mortals but now lived with her. Toby has been an invaluable asset: the connection between mom and dog. Now their lives are more manageable, and Angel Laura can concentrate more on mortal dogs in need.

And, at the end of a busy day, Toby is one of a dozen dogs who snuggle with Aunt Laura in the big bed. But Toby has the best spot. He has earned it.

Posted by Foley Monster, Pocket and River Song at 9:13 PM