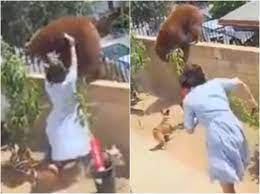 When I saw the video of a bear climbing a wall, reaching over, then trying to snatch a Yorkie from a porch, only to be thwarted by a teenage girl, who ripped the tiny dog from the bear’s clutches and pushed the intruder off the patio.  I figured I would get a pray request from the nervous dog or the courageous girl, but instead, the bear is the one who reached out to me for guidance and miracles.

I was not thrilled to visit a bear, even as an angel.  They are wholly unpredictable and are prone to violence.  But, for some stupid reason, I took an oath.  It was my duty to try to assuage what was bothering the bear.

I found him sitting in the woods.  He looked distraught, and I felt terrible for him.  I asked him how I could help.

“I am very sorry for scaring the little dog and the girl.  I am just lonely and have long dreamt of having a dog of my own.  I guess it is never going to happen.”

Yeesh!  I liked bears better when they are violent.  I told him I was sure that forest animals would love to be a pet to a bear.  “No, I have tried,” he responded.  The foxes are too rough, and the squirrels to soft.  Dogs are just right.”

“But dogs aren’t used to living in a forest,” I told him.  “We are more pampered house dogs.  How about a coyote?”
“I tried one.   I woke up, and one was gnawing on my leg.  They are horrible pets.”  I could understand that.  But the problem remained:  What dog would want to live with a bear in the woods?  Then I realized the answer a dog who didn’t have anything to lose.

I checked my I-Paw and found a kill shelter within a half-mile.  I told the bear I would be back.  I flew to it and found a very distraught dog due to being scheduled to be put down the following day.  I told him I could give him more time in the mortal world.  All he had to do was wait until he saw the bear and then run for it.  The dog, named Sam, was confused, but I told him all would be clear.

I went back to the bear and told him to follow me.  Since humans can not see me, it looked like a wild bear had come down from the woods and stormed the streets.

I knew the police would be coming with their deadly bullets, so we could not dally.  We went straight to the shelter.  The bear stood on his back legs and roared.  Sam was out of the cage, walking the green mile to his final journey when he saw the bear he, broke away.

Together they ran like reindeers down the streets, behind buildings, where they disappeared into the woods.  When they stopped running, the bear introduced himself as Sam and asked Dave if he would be his pet.  Sam had never had an owner who loved him before, so he happily agreed.

I think Sam and Dave will be happy together.  Before sending a dog to the Bridge, I wish more people to seek out the bear classifieds to see if one wants a dog.  It would save shelter dogs and those at homes because lonely bears will no longer be looking to snatch dogs from yards.

Once again, I think I’ve done it.

Posted by Foley Monster, Pocket and River Song at 9:54 PM