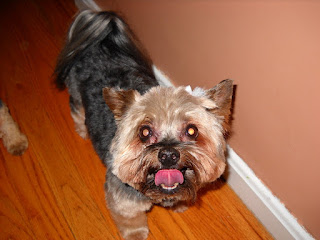 Ollie and his sister Matilda was born on the street to a mom who never knew love or human touch. She taught them to be afraid of humans, which was redoubled when their mom was caught by the dog napper and never seen again. Ollie told Matilda the street was not safe, and they retreated into the woods.

They soon learned how to hunt and found shelter under a large, fallen tree. There were threats to their existence. Coyotes, foxes, fisher cats, and other predatory animals lived in the woods with them. When threatened, Ollie led his sister to safety and stared down at the opposition. He was a small dog with a big attitude and a growing reputation in the forest for fighting.

One day, after Ollie hunted and brought back two chipmunks to share with his sister, they heard a sound they had never encountered in the wild: A child's cry; Ollie told Matilda to wait while he investigated the noise.

He saw a young girl, no more than three, sitting in the woods, crying. Ollie hid behind a tree stump. Little humans, especially crying ones, brought bigger humans, and they would try to capture Ollie and Matilda. A bark in Ollie's head told him to run, but he could not leave the girl. The instinct to protect humans had kicked in, even though he had never had a relationship with one.

He did not hear a curious Matilda sneak up next to him. He was startled when she placed a paw on her shoulder. "She looks hurt; what should we do?" Matilda asked. Her brother said they do nothing because the baby could be a clever trap to catch them.

After watching the child cry for ten minutes against her brother's wishes, Matilda slowly approached the girl and put her head on the toddler's lap. The child bent over and cried into Matilda's soft fur.

Ollie knew he had to help and lay down next to the lost girl. She tenderly stroked his fur, and Ollie felt a calm wave pass over him. He entered that timeless state dog's experience in contact with a loving human. When he snapped out of it, he realized it was getting dark and colder. They kicked leaves on the girl to make a blanket and then lay next to her to keep her safe.

Ollie did what he had avoided doing for his entire life. He prayed for a person to come for them. The girl's safety was more important than his own,

Luckily the prayers came to me, Judge Foley Monster.