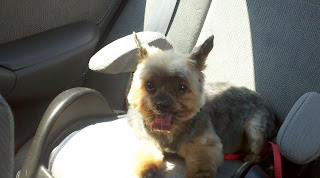 Ollie and his sister Matilda had spent their life on the streets and woods, avoiding people at all costs. But when a little girl became lost in the Forest, they protected her by snuggling close and risking their freedom by praying for help.

Luckily for them, the prayers came to me. I flew down and saw them protecting the girl. I had checked the human prayer center and found several requests to save the little girl. I told Ollie what he needed to do. Find the humans looking for the girl and lead them to her.

I located the rescuers and then returned to get Ollie. He followed me into the woods towards the people who would rescue the child. Regrettably, I should have found a way to signal them myself because a coyote had picked up the girl's scent and was closing it on her.

Matilda was a shy mixed breed who preferred to be gentle, so Ollie was her fighter and protector. But when she saw a threatening coyote, Matilda found the courage to challenge it. The two had a vicious fight, and after summoning great strength, Matilda chased off the coyote, but now she had a large gash on her side.

Ollie and I found the rescue and led the rescuers back to where the girl and his sister were. Truthfully Ollie could have found it without me, and he had the excellent olfactory ability.

When we reached them, Ollie let out a scared yelp and ran to his wounded sister. When the rescuers picked up the girl, she fought until they brought the injured dog with them. When Ollie followed, he was allowed in the car during the transport, and when they reached the vet, he was put in a cage while his sister had her operation.

Ollie had spent his life avoiding this situation, but now that it was here, he didn't give it a second thought. His sister's condition dominated his mind, and when she was placed next to him, she was groggy and sore but alive. He lay next to her until she began to wake, "Well, we've done it now," he said, looking through the bars.

Then from around a corner, he heard the girl's voice, and when he caught her scent in the breeze, he couldn't help but sigh, happy that she was safe. Footsteps approached. Typically, a dog would stand up, wag its tail, and put on a show, hoping to be adopted, but the duo was still afraid of humans, despite the optimistic outcome that morning, and they hid in a corner together.

The girl saw them, pointed, and said excitedly that those two dogs saved her. The cage was open, and hands full of long fingers grabbed them, and pulled them towards, what they thought was doom, but was freedom.

They were brought to a house and went inside for the first time in their lives, and, in another, they were bathed in warm water. Finally, they were placed in bed with the little girl, who hugged them, and they all fell asleep forever many mornings as the little girl's heart dogs stretched out before them.