Honey Bear is our May 2 pup of the week 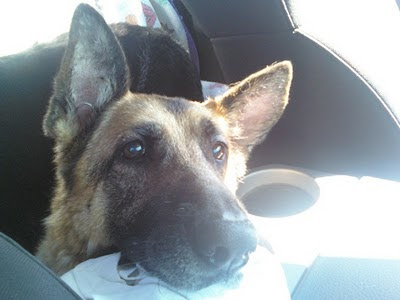 My Daddy likes to repeat a story by some guy named Bill Cosby. He would tell it after taking my human brother to all his sporting events. Mr. Cosby recounted how, as a father you buy all the equipment, you get up early to take him to practice and games, you play catch all night long, you work, you train, and your son makes it to the pros, and the first time he gets the camera on him, he says: "Thanks Mom!"

Most of us dogs are just like that, but this week, one of our Brigade members, stood up for their Daddy, and her brave actions have earned Honey Bear the title Pup of the Week.

This week Honey Bear posted a blog about her Daddy's illness and it has more big words then the dictionary. Let me break it down in every dog barks. Daddy got a stomach ache. Dogtors told him he might need some minor fixing. But instead he took some major fixing. I don't know what happened exactly but he had some Vick problems, and when you have Vick problems it hits the fan and gets over everyone and nobody likes that.

So with all this going on someone had to step up and take care of the house, which Honey Bear did whenever anyone came near (her Mom knew this from her barking when she came home) and then she did the most important task a pup can do, she took care of her worried and weary Mom.

Her Daddy is home now, and Honey Bear is still on guard, and acting as the Physician's Assistant while organizing and prayer chain and trying to keep her Mom's nerves under control because her Daddy is going to need another operation soon.

It sounds like a lot for one dog to do, but we know Honey Bear can do it, because she is our Tanner Brigade Pup of the Week.
Posted by Foley Monster, Pocket and River Song at 5:49 PM

Email ThisBlogThis!Share to TwitterShare to FacebookShare to Pinterest
Labels: Honey Bear, Pup of the week