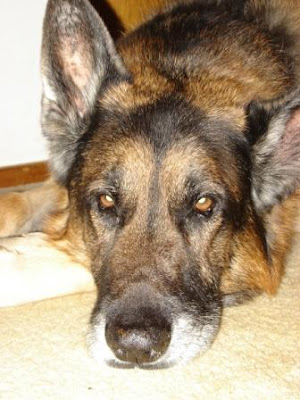 One thing us dogs can agree on, we do not like to be pricked. Pricked, prodded, probed, pinched, punched: we try to avoid all of these activities. But our Pup of the Week, Baron, also known as Bear, is getting pricked for all of us,

Our poor Bear has developed some mobility problems with the onset of his Senior years. It's sad for Mommies to see us when we're no longer kids, jumping, running, humping (OK maybe not that one.) Most dogtors say there isn't much they can do about it. You can't stop time.

But not Bear's Mom and not her Dogtor. They came up with a brilliant idea to use an Asian method of healing for our boy. When I first heard of it I was scared to death for him. All I could remember was the old episodes of M*A*S*H I was made to watch and how the people joked about the Asians eating dog.

But Daddy told me they don't do that. Anymore. (Anymore?) He also told me that Mommy used to go the an Acupuncturist. I didn't believe that for a second. I have been sleeping with them for ten years and Mommy doesn't like to be probed, prodded, or pricked by anyone.

I asked Mommy and she said it was true, but it hadn't given her the relief from the back pain she had hoped. But she told me if it was helping Bear then I shouldn't judge. But gosh, that's what I do best.

So I checked in on Bear and he told me he wasn't afraid of those needles at all. He said his Mommy had promised that it would help him walk better and he trusted her with his life. So he didn't have a second of fear facing the needles.

Bear is doing this so he can walk again. He has been so brave in facing his mobility issues. He believed he would walk again, his Mom believed he would walk again, and they would never give up that belief. Plus they have proven to all of us skeptics, who might believe that acupuncture on a pup was silly, that, not only is it sensible, but someday his example may cure what ever ailments of being a Senior dog are thrust upon us.

Here's to Bear: The pup we all want to be when we grow up
Posted by Foley Monster, Pocket and River Song at 9:34 PM