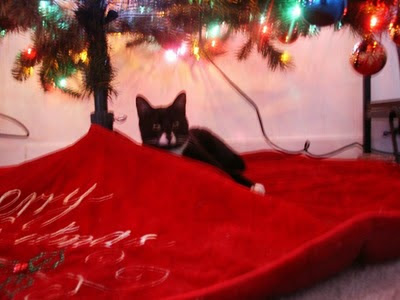 Pocket and I are exploring what went wrong with the system this week. We ran the numbers again and again. We recalculated the machine. We even paid Steven Jobs to check every aspect of our operating system. But the results were irrefutable. For the first time in Tanner Brigade history our Pup of the Week is....I can't say it.....a cat.

Not that Boots didn't have an amazing week. If she was a dog, this wouldn't have been a contest at all. You see two weeks ago Boots just disappeared. Now I don't know how this happened. It certainly had nothing to do with me sending the "Download yourself" codes to Savannah and having Boots intercept them and download herself. Nope, that didn't happen.

The first place Boots went was Chile. She found a little hole in the ground. She carried in her teeth a small cable connected to a camera. She used her heightened sense of kittiness to find the trapped minors and establish communications.

From there she went to Florida. For those of you who don't know Boots is a big Duran Duran fan. So is a preacher down in those parts named Terry Jones. Little known fact: Pastor Jones has many rare Duran Duran CD's. Boots asked the Pastor to burn some Duran for her. Not understanding kitty speak the Pastor misinterpreted, and boy was there trouble.

Perhaps it would have been better, during Boots trip to lower Manhattan,if she hadn't announced what a lovely site it would be for a mosque, but there is no proof that she even knows what mosque means. OK, so, on her night out with Paris Hilton, she should not have asked her to slip something into her who-who because Boots has priors and could be facing hard time and poor innocent Paris got arrested. We must all admit that her stint as Arizona Governor Jan Brewer's speechwriter may not have been the field she is most qualified for. The same for her writing Al Pacino's acceptance speech at the Emmys.

Finally after traveling the world, doings lots of good, and getting into some trouble, Boots was sitting in a Starbuck enjoying a Latte when she saw on her laptop that her Mommy was missing her. She knew it was time to go home and downloaded herself (I swear I don't know how) to her Mommy's backyard where she just sauntered in like nothing had happened.

So Boots you have not been awarded Kitty of the Week for everything you did while you were traveling, but that you did the most important thing, returned home to the family that loved you, which is the most important work a pet can do.

Please be advised, even if you are our first Kitty Pup of the Week, if you ever pull a stunt like this again, and scare your Mommy, we will strip you of this honor and give it to Pocket because she does silly things every week.
Posted by Foley Monster, Pocket and River Song at 8:58 PM

Email ThisBlogThis!Share to TwitterShare to FacebookShare to Pinterest
Labels: Boots, Pup of the week, Tanner Brigade