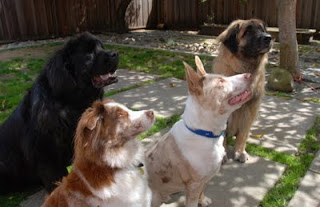 Often life is like a trip at sea.  For days you have sunny skies and clear sailing.  Then the sea gets rough, a storm comes in, a sail is torn, the mast snaps, and you become swamped as your family starts to sink.  All you can do is chart your course and hold on tight.

That is what happened this week to our pack of the week, Fuzzy Bacon, the late, beloved macaw Irie, now flying at the bridge, their canine siblings, 12, Chappy and Whiskey, and their strong and courageous parents, The Gustavsons.

Their lives have gone up and down, listed from one side to the next, but under the study hand of their parents, they keep moving forward.

Fuzzy originally answered to Dexter when he was rescued by Roxy, Dutchess and their Natalie who fostered him until his forever home could be found.  That home seemed to belong to the Gustavsons who opened their home, their heart, and their great originality at naming pups, changing Dexter to Fuzzy Bacon.  When Natalie put Fuzzy in his new Daddy's arms he snuggled in with a sigh realizing this was home.  Each Gustavson pup came out to greet Fuzzy with various degrees of enthusiasm.  But he was accepted as one of their own.  Soon they were all playing in the yard.

Shorty after Fuzzy joined the family their macaw sister, Irie began passing blood through her cloaca which is a birdie butt and a good word to know in Friends With Words.  At first the birdtor thought it was just from her laying eggs.  But it was just the first swell of an incoming storm.


Like many of our rescue friends Fuzz had aggression issues.  Let's call them the dark clouds on the horizon.  His parents decided to send him to a K9 Clinic for re-hab, and, as we sadly found out this weekend, when someone says you need to go to re-hab, you do not say no, no, no.  But the clinic wasn't sure if they wanted to say yes, yes, yes because there were some "red flags" about Fuzz's personality that might prove to be too difficult to overcome.  His mother cried, knowing, at heart, Fuzz was a gentle soul.  His Dad gave him confidence, telling him he knew he could do it.

The wind began to rip at the sails.

Fuzzy was diagnosed as being a stealth aggressor which would be great if we hadn't already caught Bin Laden, and ironic since Osama did not eat bacon.  This means that he goes from being happy with his tail wagging to being angry without warning.  It would probably be easier for people to understand if it was called Nicholas Cage syndrome.  But then people would be confused that Fuzz's aggression came from massive amounts of cocaine and not something that happened in his past life.

Fuzzy had to go to pre hab before he went to rehab.  It is exactly what it sounds like, prison before re-hab, Lindsay Lohan land, when they watch you and evaluate how much rehab you need.  After that it was a trip to AA Aggressors Anonymous.    Fuzzy got dropped off and told his Mom and Dad he would do his best to make them proud.

The staff decided Fuzzy needed even more pre hab and obedience which was silly.  Whiskey was a tough rescue and his parents did a wonderful job with him teaching him obedience.  What was different with Fuzzy?  But the people at pre hab were "experts" so their parents  went along.

Then the expert gave them the most distressing news.  He thought that Fuzz needed a new home.  That he needed to be an only dog.  They began the sad task of finding Fuzzy a new home.

Then his father came to a great realization, the "experts" were a bunch of ass hats.  Mom and Dad decided for a second opinion from another expert who was more pert than ex.  They found another person to evaluate our friend, this one came highly recommended by another dog owner they know.  So they busted Fuzzy out of rehab and brought him home, back to his family.  We don't know what the new expert will say, but whatever Fuzzy Bacon's fate will be it will be decided out of love and patience, and he's a very lucky dog to be a Gustavson.

But there are times the storm won't let you free.

This week Irie the Macaw passed from this Earth in her Mama's arms.  From the Gustavson pack's blog breaking the sad news to us:  "Mom and dad were gently petting her and telling her how much they love her.  She had started pooping blood again, and even a trip to the vet yesterday was not enough to save her"

I don't know why such bad things happen to such a wonderful pack.  I have spent much of my life lying in the sun asking such questions.

Life is a ride on rough seas.  Some days it's calm.  We've got to learn to enjoy the calm before the storm.


12, Chappy, Whiskey, Fuzz, Mama and Papa Gustovson, we love you.   We love your unwillingness to give up on a family member, the love your give our kind, the inspiration to others you give, the kindness, the wise advice, the friendship.

You are our pack of the week, and will always be number one if our hearts.
Posted by Foley Monster, Pocket and River Song at 10:21 PM